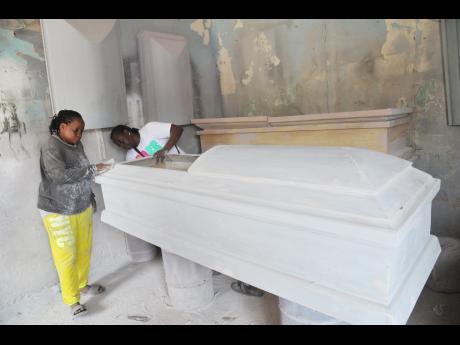 Norman Grindley
Coleen White (left) and her twin sister Nadine, preparing a casket at their work shop on Oxford Street in downtown Kingston. 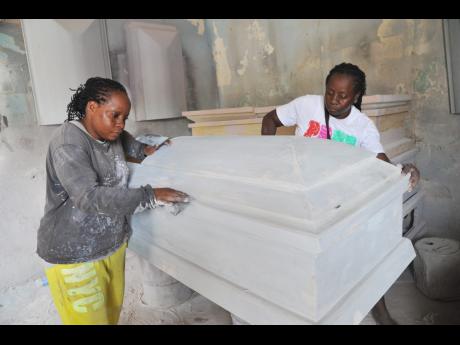 Norman Grindley
Coleen White (left) and her twin sister Nadine, preparing a casket at their work shop on Oxford Street in downtown Kingston.
1
2

When customers walk into the Talk About Sports Bar on Oxford Street in downtown Kingston, they are greeted with an unusual piece of furniture ... a casket - polished, shined and ready to use.

There is no body in it, but twins Coleen and Nadine White, owners of White's Casket Supplies, laugh whenever new customers cringe at the sight. It means the new customers will leave the bar with something to talk about, explained one of the 41-year-old sisters.

"It was an idea long time ago," said a smiling Coleen, explaining the eccentric sight inside the sports bar, which doubles as an office for the casket supplies business.

"I was around so many bars back then, and I realised that I have plenty customers coming in (for funeral supplies)," said Coleen. "When my customers come they have to go outside for a drink and I didn't like that. So that really motivated me to put a bar here," she continued, adding that the bar allows customers a place to have a drink while they wait for and examine the quality of the caskets they are purchasing.

"There is no other reason for it," said Coleen. "It's not a warning for intoxicated drivers, nor is it meant to scare superstitious persons," she explained.

And if anyone is scared by it, Nadine believes they should get with the times.

"Some people are afraid, some people aren't. But it is civilised time. So if somebody come and buck up in a casket, they shouldn't be scared. They should say 'wow, this is a good job'," she said.

The two sisters have been building caskets for more than 20 years and have debunked almost every stereotype associated with their work.

For starters, they have moved past the view that this is a man's job and that a woman has no place in it. They have also beat down the ghostly fears associated with preparing the dead for rest.

Today, however, they are faced with a new challenge - keeping their business afloat amid a burgeoning string of funeral parlours and casket builders popping up in Denham and Hannah towns.

"Sometimes it (business) good, sometimes it is not. In-between, we try to work with it, but there is a lot of people out there in the same business who are not keeping up the price as it is to be," explained Coleen.

"Material-wise, board-wise, everything is going up. But the price of the casket is not moving because we have plenty more people in it," she emphasised, comparing today's business to years gone when there were but a few of the casket builders around town.

"Today, there are at least 30 similar establishments in the area, all surrounding the Madden's Funeral Home," said Coleen.

She noted that they now employ at least three youths from the community, including a builder and an upholsterer. One casket takes little under a day to be completed, and at the end each individual, including the two twins, must be paid.

That is proving to be a challenge, as the expenses are increasingly outweighing the profits.

"Plenty times I sit down and think that I would stop because there are a lot of things to it," moaned Coleen.

"The youths who are coming up in the business are not motivated. They are only in it for the money and they don't want to finish the job properly," she said in reference to her competitors, as well as some of the youths who have worked for her.

"When that happen, is we who have all of the problems to deal with. I have to do too much talking with big people, and sometimes you give them you material to use and they waste it. We have the same problems with the customers, too. They don't want to pay for the job," she argued.

Coleen charged that there is a myth that Jamaica's high murder rate means more work for her team. According to her, even if there is an increased demand, most of the jobs go to the top-name funeral parlours, leaving little work for small business.

According to Nadine, the simplest casket goes through at least five stages. It is first made by the builder, then passed on the twins and their crew who carry out the filling, sanding, puttying and upholstering.

Caskets come in different sizes and styles and Nadine pointed to the popular G-style, S-style, Benz, half-glass and full-glass caskets.

They range upwards from $25,000, depending on the style and the work that goes into it. The styles of caskets built by the twins can be viewed in a style book that is kept in a small room inside the bar, the wall of which is covered in funeral programmes, buttons, and other burial paraphernalia.

"This is the office," said Nadine, opening the door to the room located metres from the bar's serving counter. The twins sell the caskets to funeral parlours for a minimum of $40,000, she explained, and then they sell it to customers in $200,000 packages.

Despite losing out on much of the money to be made, the love of the job keeps the twins going.

"Once you learn it, you are going to love it. I love everything about this job. Me love drawing the putty, me love fi spray - everything. And me job can't come out of me head," said Coleen.

"And once me see the youth dem nah do it good, dem get me miserable and ignorant. Me nuh like tell you something one day and have to come back and tell you again another day."