In the spirit of Revival - Part One 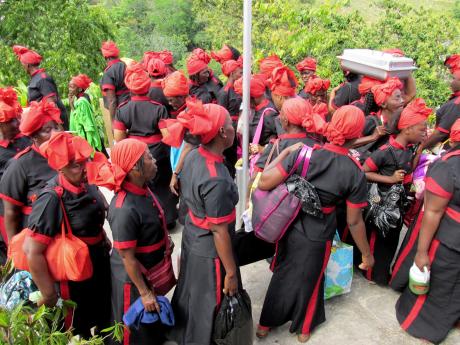 Paul Williams
A section of the largest group to have arrived at the first 2015 quarterly conference at Watt Town Zion Headquarters And Jerusalem Schoolroom. 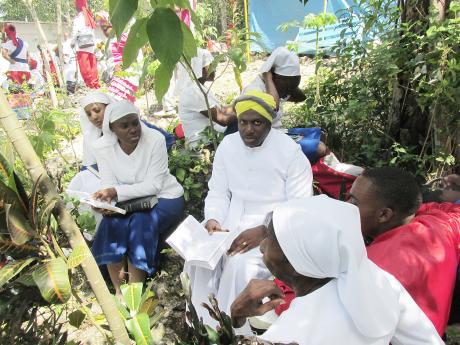 Paul Williams
All over the compound of the Zion Headquarters and Jerusalem Schoolroom at Watt Town, St Ann there were different sessions going on at once. 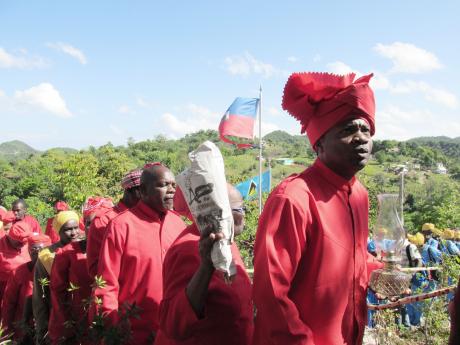 Paul Williams
With lamp in hand and serrated turban, there is no doubt who is in charge.
1
2
3

MYALISM WAS a religious movement started by Africans who were brought to Jamaica to work on plantations. It was regarded as one of the first anti-slavery movements as Myalists worked to free themselves from enslavement, an evil caused by European witchcraft, they believed.

It went through periods of proliferation, suppression, and spiritual and ideological warfare with white missionaries, who felt that Myalism was too powerful a force, which compromised their orthodoxy. But, in the late 1850s, Myalism began to evolve into what is now known as Revivalism.

"Although Myal as a separate religion probably no longer exists, core elements survived in later developments such as Revival ... . As a religious cult, Myalism reached its zenith after Emancipation to around the time of the Great Revival of 1860-61 and seems to have become absorbed into what is now called Revival," Olive Senior writes in Encyclopedia of Jamaican Heritage.

The Great Revival began from 1858-59 as a great Christian revival, known as The Prayer Meeting Revival. It swept across continental USA and the British Isles.

Tony Cauchi, writing online, says, "The results of this revival were filled churches, transformed lives, missionary expansion, evangelistic passion, philanthropic growth and a massive revitalisation of the universal church. It was extraordinary, even in Jamaica!" The fervour spread, and took root in 1860-61 in Jamaica.

Yet, Revivalism didn't emerge as one cohesive force. There are two branches, the 60 Order or Revival Zion, and the 61 Order or Pocomania. Zion tends to have many elements of orthodox European religions, while Pocomania represents mainly elements of African spiritual worship and practices.

For whatever reasons, Pocomania is much berated, even by some Zion Revivalists themselves. This negative attitude was vocalised recently in an interview with a pilgrim at the Zion Headquarters at Watt Town in St Ann.

"In everything, there is good and bad. We have 60 and 61, 60 is clean, let me not say a thing more," Linda Edwards, a long-time Zion Revivalist said.

And just as how Myalism was regarded with much disdain by planters and missionaries who didn't understand the sensibilities of traditional African religious practices and philosophies, the birth of Revivalism was to be another era of tension, misunderstanding, resentment by post-Emancipation plantation owners and the established churches.

"At the time of the Great Revival, the orthodox church leaders, alarmed by what they saw as over-emotionalism and 'heathenism', roundly denounced the Revivalists, and this attitude has influenced popular perception to this day of what are generally referred to as 'Poco People'," Senior writes.

But condemnation and persecution could not dampen the fervour of Revivalism, which has evolved into a full-fledged religion. "It is a Christian religion which many people don't know, and most people don't know that revival means from death to life. It's an ongoing process," Edwards said.

The process has come a long way, according to Senior. "Once sidelined as small bands of deluded and derided cultists, Revival bands nowadays are organised churches with pastors and bishops, convention and communion services," Senior says.

Revival churches have organised themselves into bands or 'bans' led by a charismatic or influential leader called a captain in Zion or Shepherd in Pocomania. The female leaders are called Mother and members call themselves Brother and Sister. Each band has a leadership hierarchy.

The compound on which the church is located is usually the 'yard' of the leader. It's known as the mission ground, which is easily recognised by brightly coloured flags hoisted on very tall poles. "This is both to identify the ground and attract spirits," Senior writes.