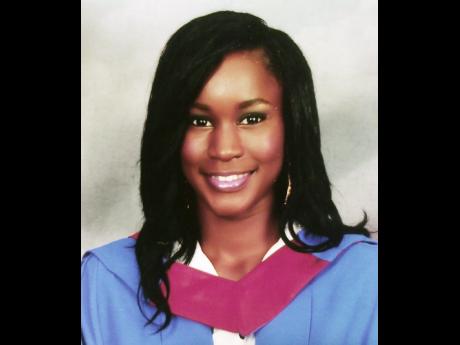 Chantelle Grant, junior engineer at Grace Food Processors Canning Division, one of the guest speakers at this year's launch of the GraceKennedy Education 5K Walk/Run 2015, applauded the Grace and Staff Foundation for the patience and diligence they exhibited towards the many students to whom they opened their hearts.

A former beneficiary of the Grace and Staff Community Development Foundation's Education Programme, Grant consistently did well while a student at Campion College. While there, she was invited to participate in the prestigious Future Leaders Summit at the University of California, Los Angeles, in July 2007.

The summit, administered through the Washington School of World Studies, prepares a selection of outstanding students from around the world to advance their knowledge while enhancing their college rÈsumÈs. The administrators of the summit target students who excel in the Preliminary Scholastic Aptitude Test (PSAT) examinations, a precursor to the Scholastic Achievement Test (SAT). Grant was one of a number of students who took the PSAT through a programme supported by the GraceKennedy Homework Centre.

"For a long time, I believed that Parade Gardens was the only community for which Grace and Staff assumed responsibility. There were actually many other centres in other inner-city communities with students just like us who needed an opportunity to get an education," Grant said.

After leaving Campion, Grant pursued a degree in engineering, made possible with the GraceKennedy/UTech Scholarship from the GraceKennedy Foundation. She performed well academically and was selected to be on the Dean's List for the 2009-10, 2011-12 and 2012-13 academic years. In 2013, she was a member of the team from the University of Technology which got first-place honours at the Institute of Electrical and Electronics Engineers Region 3 Ethics Competition held in Jacksonville, Florida. Not surprisingly, she graduated with first class honours in 2013.

Grant told The Gleaner that the foundation offered many things to students.

"It was not just the payment of a cheque to the school you attended every term. It was a holistic approach. They sought to develop the entire student and prepare them to move forward with opportunities," she said.

Grace and Staff, she said, presented them with tertiary-education options, both locally and internationally, where they attended college fairs, prepared for the SAT with formal classes on Saturdays, sat the exams, did college essay writing, developed and expanded their community service and extracurricular portfolio, and participated in the photography club in the Catalyst programme.

"The homework centre, during the week, helped us keep up with our high-school studies, and a mentorship programme aided those of us who needed guidance in selecting and attaining our career goals. My involvement in all these activities has significantly contributed to the person I am today and there are many others like me and even more advanced in their development," Grant said.

The seventh GraceKennedy Education 5K Walk/Run is scheduled for Sunday, July 12, to raise funds to support its educational initiatives. To participate, visit www.gracekennedy.com, email gkrun@gkco.com, or call 932-3300 for more information.