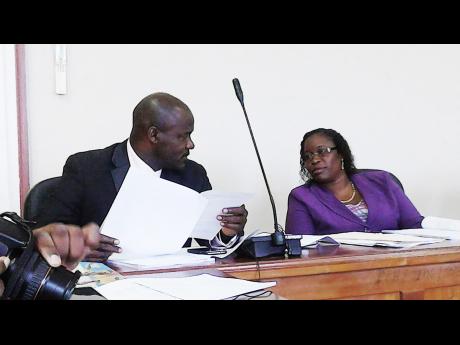 Contractor General, Dirk Harrison, has filed an application to have a court overturn a decision by the director of Public Prosecutions (DPP) Paula Llewellyn not to prosecute Hanover councillor, Shernet Haughton in a nepotism case.

The contractor general has filed the application in the Judicial Review Court against the April 23 decision.

Meanwhile, the DPP told The Gleaner/Power 106 News Centre this afternoon she will stand by her decision.

Llewellyn says her office will respond to all the arguments put forward by Harrison.

In a March report, the Office of the Contractor General (OCG) accused Haughton of nepotism in the award of contracts during her tenure as Mayor of Lucea from 2012-2014 and referred the matter to Llewellyn's office for a ruling.

It found that 22 contracts, worth more than $3.7 million, were awarded to 11 relatives and persons affiliated with the former mayor.

But DPP ruled against preferring criminal charges against Haughton saying although the evidence of nepotism is overwhelming, it is not an offence known to the criminal law.

Lewellyn noted that none of the contracts pointed out by the OCG amount to or exceeded the $500,000 threshold which would have created the circumstances for criminal prosecution.

The DPP recommended that administrative action be brought against Haughton.

Haughton is the embattled People's National Party councillor for the Green Island Division in the Hanover Parish Council.