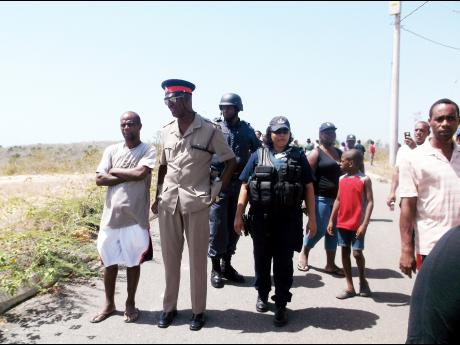 Contributed
A team of police personnel from the May Pen Police station visited the Longville Park Scheme in Clarendon on Saturday after residents expressed frustration with the slow pace at which a police post was being set up in the community. On Friday, a resident of the community was raped in front of her daughter.

ANGRY RESIDENTS of Longville Park Phase Three in Clarendon came out in their numbers at the weekend to castigate the authorities for the slow pace at which the promised police post was being retrofitted in their community.

On Friday, a woman was reportedly raped in front of her daughter after criminals targeted the community.

"Yesterday (Friday), in broad daylight, a woman was raped in front of her small daughter. We have to ask, who else they gonna rape? What will it take for us to get the attention we need? You made a promise to us and we expect it to be fulfilled," said one irate resident.

The National Housing Trust a few weeks ago donated two houses to serve as a temporary police post until the promised police station was built.

In a meeting with executives from the Longville Park Citizens' Association, an assurance was given that the police post would have been established more than two weeks ago.'

However, to date it is yet to be properly set up. In an interview with The Gleaner, Inspector Owen Brown of the May Pen Police Station said the houses are now being retrofitted.

"We are fast-tracking the preparations and it will be operational soon," he said, adding that seven police personnel would be assigned to the post.

President of the Longville Park Citizens' Association, Baldvin McKenzie, expressed shock at the brazen incidents of crime taking place in the housing scheme. "What's happening in Longville is alarming and scary. There is just too much red tape involved in getting it going," he said of the delays in establishing the police post.

McKenzie also told The Gleaner that a lot of the single females and teenagers are now traumatised and running scared.