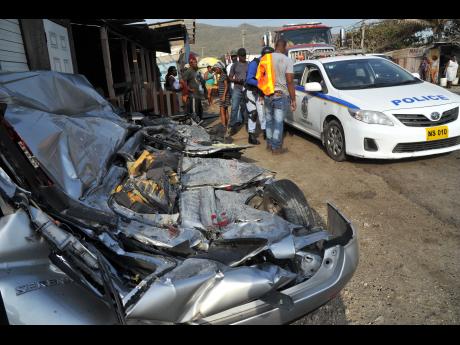 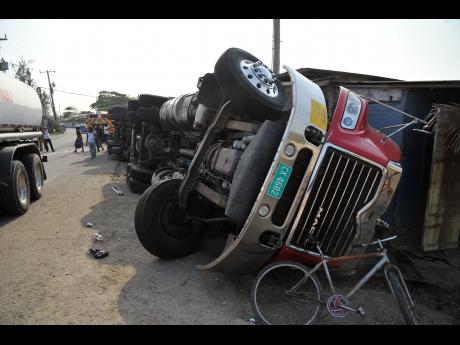 A Jamaica Urban Transit Company (JUTC) tanker trailer transporting diesel oil overturned early this morning on the Port Henderson Road in the vicinity of the fishing village below the Forum Hotel in Portmore, St Catherine.

The tanker crushed a minivan and stopped short of running into houses in the fishing village.

While no one was injured in the accident, a significant amount of oil from the tanker escaped into the sea, raising concern for the fisherfolk who tried to contain the leak by filling buckets and bottles with the oil.

Operations manager at the JUTC, Kirk Finnikin told The Gleaner that investigators are making an assessment of the damage and will be making a formal report.

“We do not yet know what kind of damage we are dealing with but we are doing our investigations. We have called in NEPA (National Environment and Planning Agency) to come and contain the spill. The fire department will be giving their report and the police and the Island Traffic Authority (ITA) has also been involved,” he said.

ITA officials have raised concerns that the tanker seemed to have been travelling on the wrong route and without escort, in contravention of a special permit issued for vehicles above a certain length and size.

“Look at the size of this trailer. It should not have been issued with a fitness certificate. We normally don’t issue fitness for these vehicles. They get a special permit which has very specific conditions under which they can travel,” one official argued while inspecting the tanker.

Asked about the concerns raised by the ITA, Finnikin indicated that the issue will be investigated.

“I don’t know if the driver was travelling with an escort or if this is one of the permitted routes. We are making our checks and doing our investigations. Once we have all the information we will be taking the necessary corrective action,” he said.

Meanwhile, fisherfolk who live in the affected area said the oil spill  will affect their livelihood.

“Look on all that oil gone in the sea. You soon see dead fish float up all along here,” one resident said.