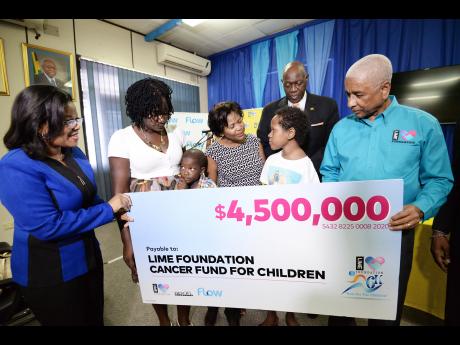 Dr Anthony Wood, CEO of the Bustamante Hospital for Children (BHC), was in a joyous mood yesterday as he placed emphasis on the significance of the hospital's partnership with the LIME Foundation as they launched the Cancer Fund for Children on Wednesday.

The launch of the fund took place on the grounds of the BHC in Kingston, with a total of J$ 4.5 million donated to aid in cancer care at the hospital.

The funds were raised through the LIME Foundation's 6K run which took place in January.

"The Cancer Fund between the LIME Foundation and the Bustamante Hospital is very significant because, as Dr Dawson indicated, it will help with the children and the parents in a special way. It will help the funding, whether it be chemotherapy or radiotherapy, so it goes a far way," Wood told The Gleaner.

"Cancer is very expensive and is one of those diseases that can cause children to go through significant pain," she added.

"With the help from LIME, we will be able to better manage children who are diagnosed with cancer in a very special way."

Annalease DaCosta, mother of 11-year-old Lloyd DaCosta who is a patient at the hospital, also stressed that the money will go a long way in assisting the children who suffer from cancer.

"I am feeling good about this venture that LIME has embarked on and I think it is so heart-warming. It feels good to know that companies are reaching out to our children, because they really need the help," she told The Gleaner.

"It may not help or help Lloyd per se, because he has finished his chemotherapy and done all of this treatment already, but the fact that it is going to benefit other children makes me feel good.," DaCosta continued.

Errol Miller, chairman of the LIME Foundation, also noted that the partnership should be no surprise as LIME has long been a supporter of the health sector in Jamaica.

"Last year when we announced that the proceeds of our annual 6K run would go towards supporting children with cancer, we had no idea how successful we would be in that regard, in relation to how much money we would raise. Today, we are very pleased with the result which has been achieved and the overwhelming support that we received from our sponsors with the partnership of the BHC," he said.

"We will be launching the fund with J$ 4.5 million, all earned from our LIME 6K run in January. Our foundation will be administering the funds in partnership with the Bustamante Hospital, and it is the hospital that will make recommendations for those we should assist. For me, this is one of the most satisfying days of my almost 30 years at LIME, Anything that has to do with the betterment of children in this country really goes to my heart and today, I am very honoured to be the chairman of this foundation," Miller added.