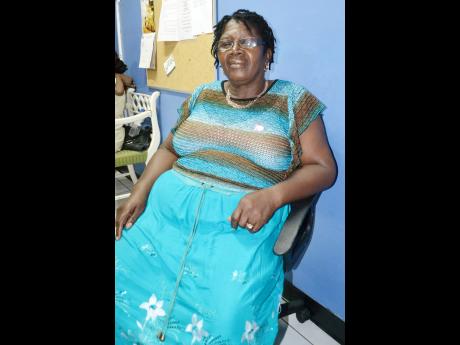 Not everyone is fortunate enough to be a cancer survivor. More often than not, someone stricken with cancer ends up being counted among the many victims whose lives the dreaded disease has taken.

For 64-year-old Olive Hylton of Port Maria, St Mary, however, surviving has not been a matter of just being fortunate. it has been her amazing strength that has seen her standing tall even as members of her family took the news of her cancer really hard.

"I don't know what has given me this strength; it must be God," Hylton, married with two daughters, told Family and religion.

"Right now, there are five ladies in Port Maria. They all come to me for support. Mi tell them God gimme this thing to help others, to encourage others."

It was in 2007 that Hylton was diagnosed with breast cancer.

One morning, she was sweeping her yard when she just decided to do a self-examination of her breast.

According to Hylton: "As I started to sweep down towards the noni tree, I remember that they say noni is good for cancer, so I put down the broom and start feeling my breast, just like that. When I feel, I feel a lump. I feel about three times, a long lump on the top of the left breast. My 'husband was in the kitchen and I bawl out, Cap! Cap! One lump inna mi breast!',"

Her husband came and felt the lump himself and they decided to do a check, with the possibility of cancer staring them in the face.

She later went to Annotto Bay hospital and was referred to do a mammogram, which she did in Ocho Rios.

"When I was doing the mammogram, that was the only moment I felt scared," Hylton stated.

She brought the result back to the doctor and was given an appointment to do an operation at the Annotto Bay hospital to remove the lump.

"After the doctor take out the lump, him ask mi how many children mi have an' mi seh two. Him seh, 'go home go tell them say this cancerous'."

But she didn't tell anyone. At least not yet.

Faced with the reality of having breast cancer, Hylton hardly budged.

When she finally told her husband and children, they were devastated.

"My daughter, who is abroad, cried. The one here, I didn't see her cry, so I don't know if she did."

As for her husband, he couldn't take it.

"When I showed him the X-ray paper and say, 'Cap, yuh know seh mi haffi go cut off mi breast?' When mi look mi nuh see'm in front ah mi. When mi go inna di bathroom mi see'm a cry. So mi seh to him, 'man, if you a cry wha yuh lef' mi fi do? Anno your breast, yuh nuh, a mine'."

After the operation, Hylton said she did not do chemotherapy treatment, but remained on medication for a required period.

On Wednesday, at the launch of the St Ann/St Mary branch of Jamaica Cancer Society's Relay for Life, she reported that with God's help and support from her family, she was in good health.

She now spends her time supporting others affected with the disease and is urging others to be proactive.

Relay for Life will take place on August 22 at Turtle River Park in Ocho Rios.