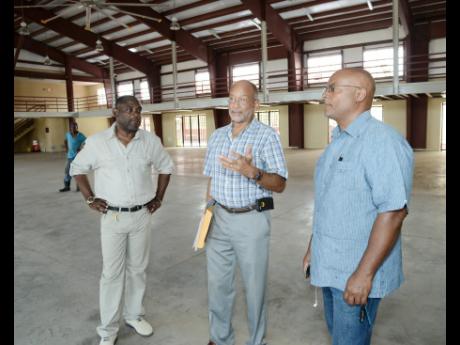 Ian Allen
Douglas Orane (centre), member of the Wolmer's Old Boys' Association explains the concept behind the design of the auditorium to Lloyd Carney (right), past student and Dr Walton Small, principal of Wolmer's Boys' School. Occasion was a tour of the new auditorium and Wolmer's Girls' School on Wednesday.

Think Wolmer's old boys and girls and the word loyalty comes to mind.

And one old boy who has remained fiercely loyal is Lloyd Carney, CEO of Brocade Communications, an American technology company specialising in data and storage networking products based in San JosÈ, California. A proud Wolmerian, Carney attended the Heroes Circle school between 1973 and 1979. He has no doubt about the role the institution played in his development.

"I had a really good head start when I went to college in the US," he said. "My first year in college was a piece of cake; they called me 4.0 Carney because I got straight As."

Carney, who tries to visit Jamaica at least twice a year, dedicated his latest trip to see the Wolmer's Auditorium at the Boys' School, which he and other old boys helped construct. He heard about the auditorium after providing chairs and desks for Wolmer's Girls' School. He asked what else he could do and the rest is history. Carney donated US$150,000 and said the school has always been in his thoughts.

"I have always kept my finger on things back here," said Carney, noting he has also provided assistance for his other Jamaican alma mater Vaz Prep. But giving back is not something limited to his old schools.

"Growing up in Jamaica, my dad always emphasised that we should do more," he said, noting his philanthropic efforts continued at Wolmer's. "There was the children's home in Half-Way Tree where we used to put on concerts, put on movie shows, sell tickets and donate the money to them."

In 1999, Carney and his wife established The Lloyd and Carole Carney Foundation, a philanthropic organisation which focuses on health care and children's needs. They committed to put away 10 per cent of their income annually to the charity. The University Hospital of the West Indies and the Black River Hospital are among the recipients of life-saving equipment. They also supported an orphanage in South Africa, rebuilt a hospital in Haiti, and assist Boys and Girls Clubs in the USA.

Regarding the auditorium, Carney lauds former GraceKennedy chair Douglas Orane and other alumni for their sizable role in completing the project.

"It's one thing for me to write a cheque," he reasoned. "There have been many people involved in this process who put in a lot more effort and personal sacrifice of time and effort. It couldn't have happened without them."

Carney was impressed with the nearly 12,000 square foot auditorium. Orane and officials from both the boys' and girls' schools also gave Carney a tour of the campuses, highlighting mainly the information technology needs of the schools. Orane also lauded the teamwork of the alumni in completing the project. He said he noted two things about fundraising. One, when you're trying to fundraise, 'friend raise' first.

"Build relationships with the institutions and the people and the funds come after," he said. "The second one is to be very organised like a business, because you must have the infrastructure in place to support the fundraising efforts."

He noted that the Wolmer's alumni created a social-media programme, including an electronic database of past students, and they try to keep old boys and girls abreast of what's happening.

"For the auditorium, about half of the funds that we received (about J$170 million) came from overseas," he said. "And that's very important because the people overseas are yearning to participate."

Principal of Wolmer's Boys, Dr Walton Small, said the auditorium was long in coming and was extremely grateful to Orane, Carney and all those involved. He noted that there were other projects on the horizon like a multimedia resource centre to make teaching more interactive. Carney said the quality of the education and people at Wolmer's are reasons their old-student network is so strong and why they keep giving back.