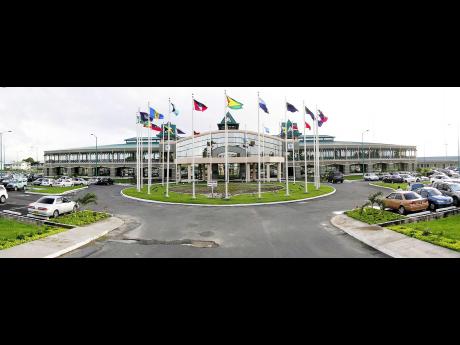 Contributed
The headquarters of CARICOM in Guyana.

The 15-member Caribbean Community (CARICOM) is considering a proposal to lobby multi-lateral institutions for a total debt write-off as part of strategies to fix the economic woes of member countries.

The debt relief proposal was put forward by the Economic Commission of Latin America and the Caribbean (ECLAC) at the 36th regular meeting of the Heads of Government of CARICOM, held recently in Barbados.

Minister of Foreign Affairs and Foreign Trade, Senator A. J. Nicholson, in a report in the Senate on Friday, explained that the proposal is for 100 per cent debt write-off overtime, and would involve the cooperation of multi-lateral institutions, donor countries and small state debtor countries.

He said the debt relief would create more fiscal space, and assist member country governments in adapting to social, economic and climate challenges.

“This would mean more ease of the liquidity constraints, as well as address potential solvency risks,” he said.

Nicholson, who noted that the proposal “is welcomed and deemed worthy of serious consideration,” pointed out that ECLAC has come to the realisation that it is not possible to use only domestic resources to move the Caribbean countries from debt to growth.

In furtherance of his support for the proposal, the foreign affairs minister argued that with only one per cent global debt, “the region’s debt burden is not enough to generate much international concern”.