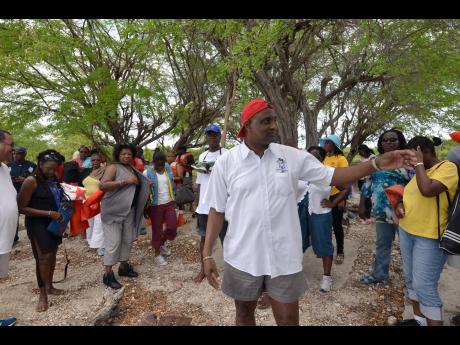 With work reportedly taking place behind the scenes, head of the education and training subcommittee of the logistics hub task force, Dr Fritz Pinnock, has sought to allay fears that the Goat Islands project is dead.

Pinnock, head of Caribbean Maritime Institute (CMI), last week declared that the Goat Islands proposal has not been shelved, even though public discussion has become eerily silent.

Speculation that the Goat Islands project is dead has been growing since April when the Government's point man, Works Minister Dr Omar Davies, failed to mention it when he contributed to the 2015-2016 Sectoral Debate, even though he spoke about several other major projects.

But in an interview with The Sunday Gleaner, Pinnock said the project was active. "Despite the silence of the moment, the Goat Islands development plan is still alive. It is back on the table, for it is the gateway to the development we are seeking. We cannot be so hostile to investors. We have to allow the process to run its course," said Pinnock.

"We need the Goat Islands concept and an integrated air and seaport expansion beyond what we have at Kingston Container Terminal and Norman Manley International Airport. We need a new cargo facility that can support air and sea, because the central development tool is the establishment of economic zones. A cluster of economic zones," added Pinnock.

According to him, when big companies come to the cluster of economic zones in Jamaica, a whole supporting infrastructure of medium and small enterprises will be needed to provide support.

He argued that a big engineering company that establishes in Jamaica will need welders, maintenance, meals, laundry, roads as supporting infrastructure.

The proposed Goat Island arrangement is for China Harbour Engineering Company (CHEC) to spend US$1.5 billion to develop a project which should create an estimated 10,000 jobs and position Jamaica as a major logistics hub.

The Goat Islands plan is envisaged as a large green field project, which will be implemented in phases.

The industrial park is expected to carry on the operations associated with storage, assembling and packaging of goods in light industries; heavy industry manufacturing; information technology; and skills training.

Other areas include dredging and land reclamation activities to create the port and suitable access channel to the port facility; construction and development of a container terminal with modern fittings, technology and services; and the construction and development of berths of sufficient width, length and depth to accommodate Super Post Panamax vessels.

There will also be the construction of a coal-fired electricity generation plant for the supply of power to the facilities in the project.

But opponents of the project have argued that the Goat Islands, which are part of the Portland Bight Protected Area, are home to a number of species which can only be found in Jamaica, some of which are at risk of extinction.

The critics further argue that the area provides tens of millions of US dollars annually in carbon sequestration services.

However, Pinnock retorted that the economic growth of Jamaica needs multibillion dollar investments such as CHEC is putting into the Goat Islands.

He argued that these well-needed investment are being hamstrung by disagreements.

According to Pinnock, a rotten attitude towards proposed investments, coupled with the problems of unemployment and unemployability, are to be blamed for the economic rut that Jamaica is now facing.

"We train people with the wrong skill sets. We produce a whole lot of people with degrees in business management. When they come to The Gleaner, what can they do? But they have a degree," argued Pinnock.

"At CMI, we produced students with skill sets for the global marketplace, and Jamaica is one of the stops they can make. Producing skills for Jamaica alone is not a good investment. We should be less upset about the brain drain and instead provide persons for the world's workforce," he stated.