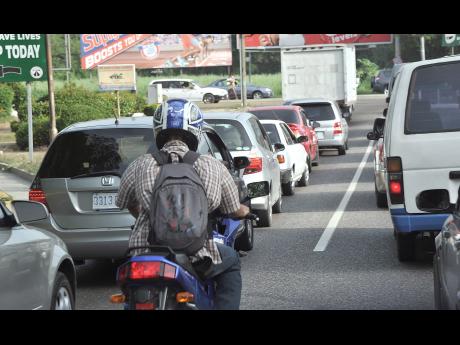 Norman Grindley
A motorcyclist driving through traffic in the Corporate Area.

Most major insurance companies operating locally have dismissed claims that they are refusing to insure motorbikes following a spate of accidents involving the vehicles in recent years.

With the police reporting that several motorcyclists stopped on the roads are riding bikes that are not licensed or insured, some persons have pointed the fingers at the insurance companies, charging that they are refusing to provide coverage for these vehicles which have been involved in scores of accidents.

However, checks by The Sunday Gleaner last week showed only General Accident Insurance Company was not offering coverage to motorcyclists. There was no response from the company as to the reason for this policy.

A representative of British Caribbean told our news team that the company would offer insurance on the condition that the operator has a valid licence and more than one year riding experience.

At Crichton, the policy is that insurance will be granted if the rider has more than one year experience with no accidents.

Over at JN General Insurance, the condition is that the motorcyclists must have another insurance policy, home or auto with the company.

Advantage General said if a motorcyclist had been involved in a previous accident the insurance will be issued at its discretion, while AIG said it offers motorcycle insurance in line with its motor vehicle insurance scheme.

The problem of motorcyclists disregarding the rules of the road has been an ongoing one, but with more than 50 of them dead in road traffic accidents since the start of the year and several others involved in costly collisions, the problem of no insurance coverage by many cyclists has been placed on the front burner.

Director of the Road Safety Unit in the Ministry of Transport, Kenute Hare, recently pointed to the lack of proper registration and licensing, compounded by the failure to wear the prescribed safety gear, including helmets, as a major issue for motorcyclists.

Head of the Police Traffic Division, Senior Superintendent Calvin Allen, has repeatedly vowed to take action against these motorcyclists.

Last week, Allen told The Sunday Gleaner that persons found driving motorbikes, which are neither licensed nor insured, would be prosecuted.

"Most of the bikes are not registered and these are seized by the police, until persons can come forward with the necessary documents," said Allen.

"A lot of those bikes, especially in the western end of the island, are not registered or insured, so when the police carry out their operations, those bikes are taken and the owners are given the chance to come in and prove their ownership and that the unit is roadworthy," added Allen.