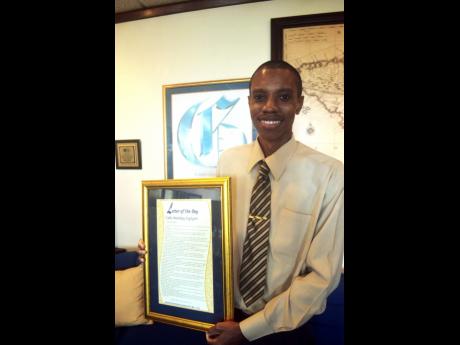 Dujon Russell's biting criticism of the Broadcasting Commission's regulation of content has earned the customer care supervisor The Gleaner's Silver Pen Award for May.

The Silver Pen is awarded each month for the best letter to the editor.

Russell's letter complained about the Broadcasting Commission's negligence in relation to how it regulates content.

"The Broadcasting Commission is a rubber-stamp functionary and a toothless watchdog that engages in incompetent and ineffective regulation," he stated in his letter, in which he also argued that customers should be compensated by cable companies that sell a product that "is not theirs to sell".

Speaking with The Gleaner last week, Russell said the country "has known for almost 20 years that the Broadcasting Commission has not been regulating with a vision".

Asked if he had seen any improvement on the part of the commission, he said: "To be fair to them, I believe that they have been doing some work. I wouldn't say that it reaches to the level of acceptable standards."

He added: "As I wrote in the letter, competence is one of the attributes that a regulator should possess."

Russell insisted that the regulators should have a vision of not only what to do, but also of when and how to execute their agenda.

He added that he still believed the consumers should get refunded as they were unknowingly given unauthorised channels.

"Even if we get channels, the fact is that they were not for us or for you to sell," said Russell.

The Silver Pen winner said customers "are entitled to compensation" because they were not adequately informed prior to purchasing the service. He said it is the cable companies' responsibility to ensure that what they offer to customers is legitimate.