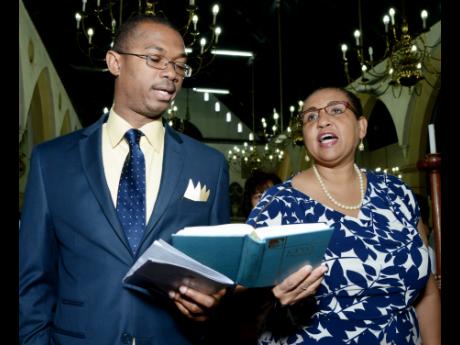 Ian Allen
Arnaldo Brown, minister of state in the Ministry of Foreign Affairs and Foreign Trade, and Greta Bogues, senior director of corporate affairs and external communication, J. Wray & Nephew, share a songbook during the service. 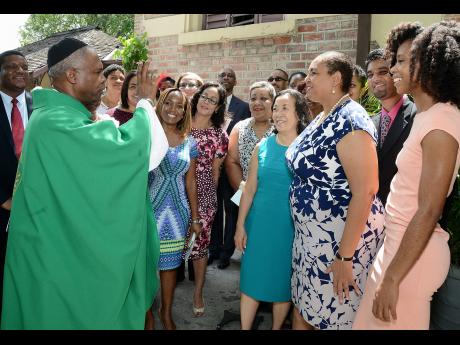 From its inception in 1825, Jamaicans all over the world have bestowed J. Wray & Nephew with mastering the art of distilling. But at the St Andrew Parish Church yesterday, the highest praise was for the Master Creator, where both J. Wray & Nephew staff and executives gathered to commemorate their 190th anniversary with a service of thanksgiving.

After a prompt 8 a.m. start, and lusty singing from the congregation and the National Chorale, Greta Bogues, senior director of corporate affairs and external communication, in her message, said the service at the St Andrew Parish Church didn't happen by chance as both entities are celebrating significant anniversaries, one being the oldest church and the other - the oldest registered company in Jamaica.

"J. Wray & Nephew is today an internationally recognised and respected Jamaican manufacturer and home to some of the world's most celebrated brands," Bogues said. She also informed the congregation that the 190 year-old company also manufactures the Catholic communion wine that was utilised at yesterday's service.

Bogues continued, "Buoyed by our passion for community development, we will donate $190,000 to the St Andrew Settlement whose objective is to aid in the development of Majesty Gardens where the company has been operating for more than four decades.

J. Wray & Nephew's 190th anniversary activities will be yearlong with events islandwide with emphasis being placed in key areas such as education, community development, agriculture, and health," she said.

Assistant Curate the Reverend Olando Gayle, in his gospel charge, said, "The core values of J. Wray & Nephew - integrity and passion, pragmatism and performance orientation - have allowed them to create nothing but the best."

Rev Gayle, who referenced the ongoing dry spell, cautioned the congregation to take care of the environment because, in spite of the drought, God is still with us.

And, Arnaldo Brown, minister of state in the Ministry of Foreign Affairs and Foreign Trade, congratulated J. Wray & Nephew on the milestone and praised the company for its donation to the St Andrew Settlement.