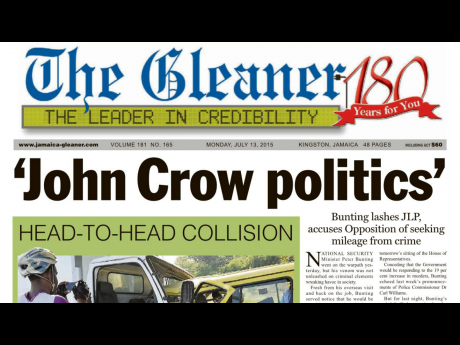 The Jamaica Labour Party (JLP) has called a press conference for this afternoon to respond to scathing criticisms leveled against the party yesterday by National Security Minister Peter Bunting.

According to a media advisory sent just over an hour ago, the briefing, set for two this afternoon,will be chaired by opposition spokesman on National Security, Derrick Smith and his deputy, Pearnel Charles.

The advisory notes that the briefing will address national security matters and the government's management of the crime portfolio.

However, a member of the party has confirmed that the press conference will address the verbal attack leveled against the party by Bunting yesterday.

Bunting, who was speaking at the  People's National Party's Eastern St Andrew conference at the University of the West Indies yesterday afternoon, did not mince words when he described Smith as rejected, discarded and recycled.

The National Security Minister also likened some members of the JLP to vultures who gleefully see every loss of life as an opportunity to gain political mileage.

Bunting told supporters that the JLP has left him no choice but to respond to their underhanded tactics.

According to the National Security Minister, he will respond comprehensively and devastatingly at tomorrow’s sitting of the House of Representatives.

The National Security Minister also described the strategy of the Opposition as that of a political dunce.

Noting that Smith was National Security Minister for an eight month period when there was an average of nearly seven murders per day, Bunting questioned how the opposition spokesman could now be “jumping up and down over three murders per day”