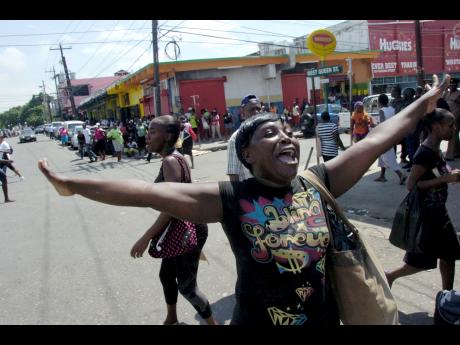 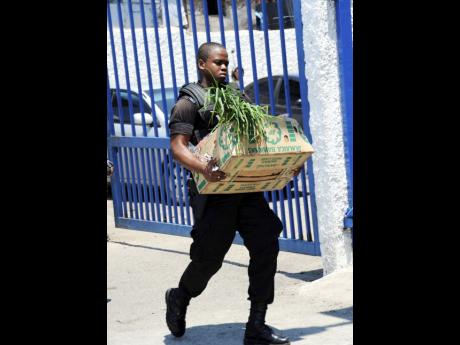 Norman Grindley
A policeman carries a box with ground produce to the Darling Street Police Station after seizing them from a vendors selling in the no vending area in downtown Kingston. 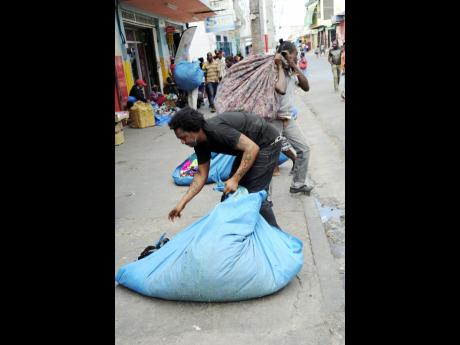 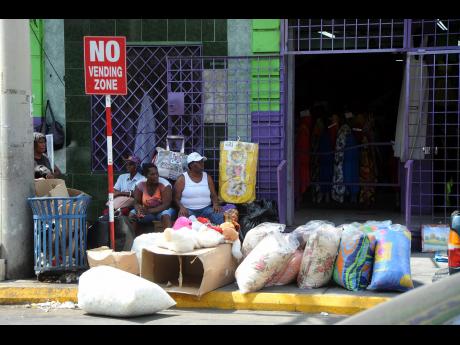 Jermaine Barnaby
The very visible no-vending sign is not an issue for these vendors as they ply their wares on Orange Street in downtown Kingston.
1
2
3
4

For scores of vendors in downtown Kingston, dodging the authorities is as much a part of their daily lives as is making a sale.

Many of these vendors are not licensed to sell in the market district, while others ignore the rules and set up their stall in areas not designated for vending.

It is an issue that every head of the Kingston and St Andrew Corporation (KSAC) has had to grapple with, and one which the current Mayor of Kingston Angela Brown Burke is vowing to address.

Brown Burke recently warned of stronger enforcement of the no-vending regulations even as vendors continue to illegally transform sections of the market district into vending areas while playing a game of cat and mouse with officials of the KSAC and the police who try to enforce the rules.

According to Brown Burke, while she understands the vendors' need to live, public order must be maintained, and the KSAC will be participating with the police, the Jamaica Urban Transit Company, vendors, and merchants to ensure that order is maintained.

"Business does not progress in chaos," said Brown Burke. "Unpopular though it be, someone has to maintain public order."

Illegal vending on Beckford Street and other sections of downtown Kingston has long been an inconvenience to motorists, pedestrians, and formal business operators with no indication that it will stop anytime soon.

"Look pon dem! Look! Dem see we a come but dem don't care," one member of a KSAC enforcement team told The Gleaner recently as he pointed to vendors ignoring the no-vending signs on Beckford Street.

He was among a team of seven KSAC employees who received a tongue-lashing from vendors at the Intersection of Beckford and Princess streets. The vendors were angry that the KSAC employees had confiscated the goods of one male vendor, who apparently never heard the shouts of "dem a come" and "Metro" as the van approached about midday.

"There is to be no vending on Beckford Street, but some of them just don't care," said the KSAC employee.

"And then you hear them bawl seh we take away dem goods, but a lot of them don't have any respect for us. Them see us coming and them just pick up the things and walk off till we gone them come back at the same spot.

"We don't chase them. Anything we hold on to, we confiscate. But them walk off with the tarpaulin on them shoulders like we can't take it from them. That is still an offence," emphasised the KSAC employee, who asked that his name be withheld.

"Sometimes they confront us. They even throw stones and them things there and we have to duck them."

The vendor, whose goods were confiscated, had a tarpaulin of shoes sprawled on a sidewalk in the area. He put up little resistance as members of the KSAC team, placed his goods into the waiting van as others kept watch and collected his contact information.

"Dem too wicked. All dem a do is take away poor people goods," said one female vendor,

"School soon open and we have to look the money to send the youth dem go back a school. We have to sell," she added.

"Look pon we," said another male vendor while pulling the arm of a member of our news team.

"A pure young youth deh bout here. All a we live in the area, Tivoli, Mathews Lane, Southside ... some a we come as far as from 'Spain' (Spanish Town). We coulda a do other bad things ... but we chose fi sell some clothes. Why dem a give we a fight so much?"

"Day in, day out them a terrorise we. Me want to know a wah so," added the vendor.

But despite the protests of the vendors, town clerk Robert Hill, said the KSAC has embarked on several new strategies to deal with the continued illegal vending in downtown Kingston.

However, Hill declined to give details of the strategies which will be implemented in collaboration with the police.

With our news team witnessing members of a KSAC team returning goods seized from a vendor who had set up his stall in a no-vending are, Hill said this was not uncommon as the team members are allowed to use their discretion.

"When we confiscate things like food, perishable items these we do not return. They are given to the homes and so on, but contrary to that they have to go through the courts," said Hill.

"But there are some repeat offenders; they are a different thing," added Hill.