Footprints: Ivy Townsend - She was an answer to a prayer 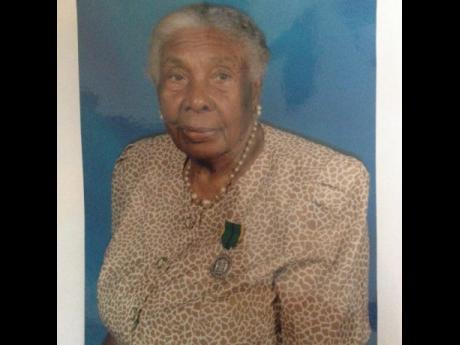 Ivy Bernice Townsend, was born at Old Breastworks on the outskirts of Port Antonio, on December 13, 1918, the only child of George Marshall and Christiania, his wife.

She was generally believed to have been a gift-child, the answer to the prayers of an old African woman, "whose tongue had not turned for two days", and to whom, she took a meal of Jamaican country soup. She was fortunate in having a father who built her self-confidence - it being not unusual for him to hire a live Mento band of four players to perform at her dolls' tea party.

Both parents also provided a pattern of humanitarian support for persons who were penniless and in need of financial and other support.

Soon after her birth, she showed signs of having a phenomenal mind with a special capacity for solving difficult math's problems.

The recognition of her mastery of the English language and her ability to express herself verbally, soon caused her peers to give her the name, "Speaker Marshall".

After completing school, she made an early marriage to Stanley Townsend, a revenue runner with whom she had five children: Beverly Carey, Maroon visionary and historian; Gordon Townsend, chairman of Knutsford Express Ltd; Claudette D'Aguilar, Barbara Townsend and Stanley Townsend, all resident in the United States.

She entered Buxton College as a mature student and went on to Moneague Teachers' College where her capacity for "New Maths" was recognised, causing her to be asked to work as trainer of teachers in that discipline.

She returned to Port Antonio and took up classroom teaching at the Carder Park Primary School, where the class size, often comprised 80 to 100 students.

After retirement, she went on to become the headmistress of Hill Preparatory School in Port Antonio. In the early 1990s, she founded the Townsend Education Trust, set up to help needy children get into Titchfield School.

In her later years, she became particularly proud of her descent from Maroon superintendent of the early 19th century George Fuller, a British planter/militia-man with properties at Golden Vale and Parkmon Estates and who was ordered in 1804, to establish Cornwall Barracks in the Rio Grande as a bulwark against Maroon rebellion.

She was an ardent Christian who contributed much to the development of the church.