'It takes a village' 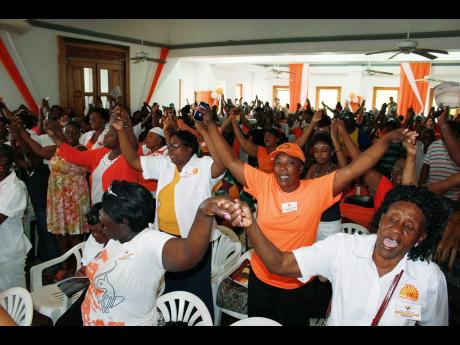 Speaking as guest speaker at the event, held under the theme 'Aspiring to be More', the prime minister celebrated her Government's attempts at tackling gender inequality, but noted there had been a disturbing increase in cases of child trafficking.

"A study by the International Labour Organization (ILO), which was published in the Washington Post newspaper earlier this year, assessed the status of women in top management positions in businesses in 106 countries, and Jamaica was found to be the country with the most women managers in the population," Simpson Miller told the audience.

"While nearly a third of businesses around the world are either owned or managed by women, according to the ILO, there are only three countries where women are in the majority as managers in the workplace.

"Jamaica is number one, with approximately 60 per cent of female bosses; Colombia is second, with 53 per cent; and St Lucia is third, with 52 per cent.

"I don't practise discrimi-nation. However, I must admit to being proud that, under my watch, Jamaica has moved from a position of gender inequality in the workplace, especially when it comes to top management positions, to being the leading example in terms of the number of women in leadership positions."

President of the PNP Women's Movement, Jennifer Edwards, praised advances made to stamp out gender discrimination, but insisted most female managers operated with limited powers.

She said: "I believe we need to assist women in leadership positions to build the institutional structure that allows them to use their powers and authority to do more for the country and other women.

"We also need to look at the number of women in decision-making positions, who head our boards. For example, an area such as water, which affects the lives of women much more than men, because our normal household duties need water, but there is only one woman on the board of the National Water Commission."

On the issue of child protection, the prime minister called on adults to show children in their communities more love and care, and urged young people to focus their energies on obtaining an education.

"We have to recapture the African proverb 'It takes a village to raise a child', and take care of our children because there is too much abuse of our little girls and boys.We need to stand up in defence of the children of Jamaica;. They are our future doctors, lawyers, architectures and engineers," she said.