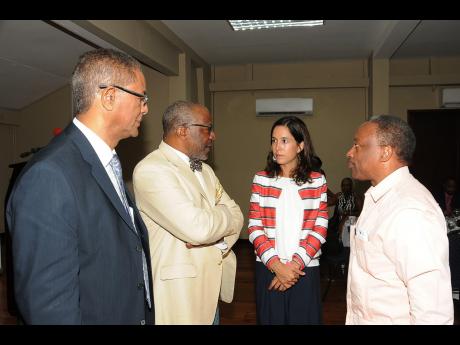 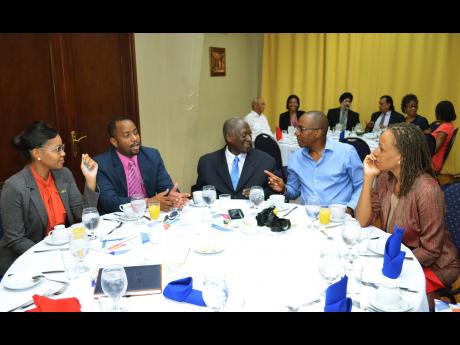 Contributed
A section of the participants who attended last Tuesday's Jamaica Chamber of Commerce breakfast meeting with presenters and others at the Centenary Conference of the Chartered Institute of Arbitrators – Caribbean branch.
1
2

Last Tuesday, the Jamaica Chamber of Commerce (JCC) hosted a breakfast meeting between selected members of the JCC and organisers and presenters who participated in the Centenary Conference of the Chartered Institute of Arbitrators - Caribbean Branch, from July 7-11.

In his remarks to the meeting, JCC President Warren McDonald noted that the chamber's interest in the conference and training event derived from the fact that the International Chamber of Commerce (ICC), of which the JCC is a member, is a world leader in the conduct of arbitration; as well as from the reality that JCC member firms have often expressed frustration at the pace of judicial decision-making in commercial disputes, and have asked for the exploration of alternative dispute resolution mechanisms - such as arbitration.

McDonald also noted that an expansion of the range of professional services that are available in Jamaica and the Caribbean can enhance the region's competitiveness, and he expressed the hope that more Jamaicans will become trained and certified to offer such services.

Rocio Digon, counsel, ICC Court of International Arbitration, New York, spoke to the attendees about the new developments in the International Commercial Court and called for greater engagement by Jamaican and regional arbitrators. Conference convener/chairman of the Chartered Institute of Arbitrators - Caribbean branch, Dr Christopher Malcolm, emphasised the potential scope for major expansion regionally in the next few years.

Among those participating in the breakfast meeting were international presenters, top-level Jamaican and regional jurists, as well as senior representatives of domestic law firms.