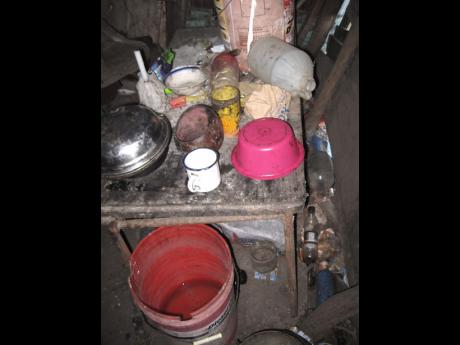 A section of Aston Bingham's kitchen. 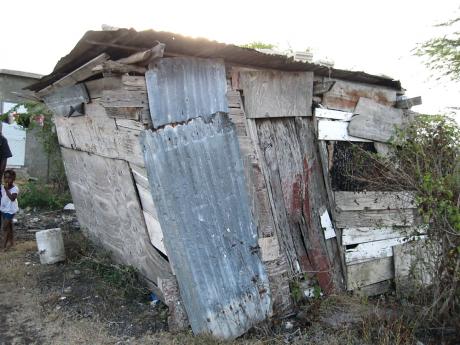 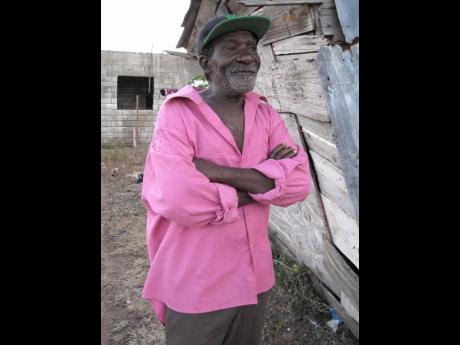 Sixty-six-year-old Aston Bingham lives alone in an old, lean wooden shed with holes almost as many as a strainer.

Living in the small community surrounded by sugar cane farm lands in Newlands, Hayes, Clarendon, for more than 10 years, Bingham said his one-room board dwelling is what is left from the last major storm to hit Jamaica.

The structure leans to one side so much that it is difficult to open the door. As a result, he has to squeeze through the small space the door permits.

Inside, he hangs plastic bags seemingly in an effort to keep out rain.

A long-time sugar cane worker previously employed to Monymusk Sugar Factory, Bingham said he was made redundant many years ago.

"Di money dem did a go give me fi redundancy couldn't buy nothing, so me tell dem me a go take piece a land, so me come here so. When me take here so, me never build same time. A out a street me did live and storm come and blow down that house and bury all di furniture under the earth. Is after that me come build dis one room here so, and di other storm lean it like dis," he said pointing to the structure.

The elderly man said a hurricane, the name or year of which he cannot remember, left behind the lean, rickety structure in which he now lays his head. He has no bathroom or kitchen.

Bingham said several attempts have been made to fix his dwelling, but he is limited by age and strength. He said contact was made with personnel from Food For The Poor (FFTP), who visited him several times and assessed his living situation, but to date, he has not received the assistance he was promised.

"The people dem (FFTP) come bout three months ago and say they would help me, and all now me no see dem. See di foundation me dig and it full up back because they say not to do anything else to it," he said pointing to the area.

When asked if he has children, he responded: "Yeah, man. Me did have some pickney enuh, but me not even know weh dem deh. A long time me no see dem."

Bingham said he burns coal and partakes in other kinds of "hustling" to feed himself, so he would really love to get the "nice likkle house" so he can live comfortably.

His neighbours say they are concerned about the elderly man's present living condition as they fear the structure will one day topple over and injure or even kill him inside.

To help Bingham, please call his neighbour Leroy Charlton at 541-8611. (Bingham does not own a phone).