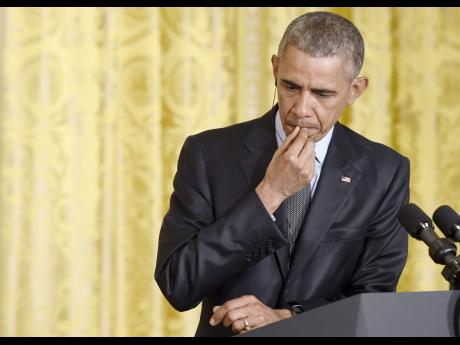 AP
US President Barack Obama. Jamaica is in its third year of its IMF support programme which is also backed by the World Bank and the Inter-America Development Bank.

Five members of the United States Congress have written to President Barack Obama, asking him to urge the International Monetary Fund (IMF) to revisit the terms of its agreement with Jamaica to avert potential social and economic ills.

Jamaica is in its third year of its IMF support programme which is also backed by the World Bank and the Inter-America Development Bank.

However, the Democratic lawmakers argue in their letter dated July 14, that Jamaica's enormous debt burden of about 140 per cent of GDP, and the extreme fiscal austerity measures have proven counterproductive.

But the five Congress members are now asking President Obama to urge the international financial institutions to revisit the terms of the IMF programme to provide the Jamaican government the fiscal space it desperately needs.

They say Jamaica’s recovery continues to stall because of declining employment and growth rates, mixed with a poverty rate that has doubled since 2007.

The US lawmakers say austerity measures have led to deep cuts in critical health and education programs.

They are suggesting that the IMF lowers Jamaica's budgetary surplus threshold.

They also want the IMF and the multilateral development banks to urgently consider extending the maturity dates of Jamaica's current loans.

Jamaica's parliamentary Opposition has also called for a renegotiation of the loan agreement to give room to facilitate growth.

The letter to Obama was signed by Congresswoman Maxine Walters, the second most senior Member of the US House Financial Services Committee, which has jurisdiction over US participation in the International Monetary Fund and the World Bank.

Yvette Clarke, Sheila Jackson Lee, Gregory Meeks, and Charles Rangel are the other Congress Members who have signed the letter.

Some of them played crucial roles in Washington to help Jamaica secure the IMF loan in May 2013.