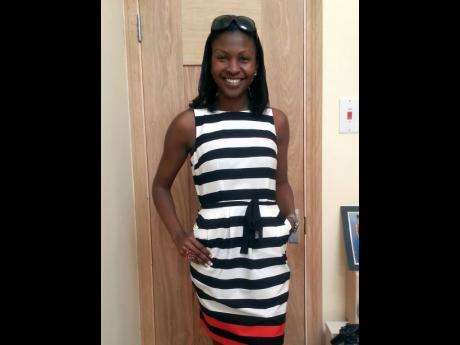 A young British-Jamaican who aspires to become a flight captain is appealing to her home island to help fulfill her lifelong dream.

Twenty-six-year-old Shaneeka Bartlett, whose family is from Kingston, is determined to beat the odds to become a pilot and challenge the status quo in what is predominantly a white-male profession.

Despite it being nearly five decades since the first woman became a commercial pilot, women are still in the minority in the profession. Globally, only about three per cent of pilots are women - that's about 4,000 of 130,000 pilots worldwide, according to the International Society of Women Airline Pilots. Fewer, still, are captains. Worldwide, there are around 450.

A recent survey by British Airways revealed that most females are negatively persuaded away from becoming pilots due to stereotyping. Some 63 per cent of women said they were put off from a career as a professional airline pilot and the opportunity to earn more than £100,000 a year, during their teens.

One in five (20 per cent), said they thought women could only be cabin crew. Thirteen per cent said they had never been on a plane flown by a female pilot, and one in 10 said they were told it was a man's job when growing up.

"I want to fly the Jamaican flag, and for black women and all women. Becoming a black female captain in England will be recorded in history," says Bartlett, who currently works as a business support manager at her parents' company and part-time passenger services agent for Swissport Agency, based at Virgin Atlantic Airways Check-In at Gatwick Airport.

She told The Gleaner: "Success is never built alone."

The first-class honours business management graduate from Plymouth University added: "It's important to bring awareness and raise the profile of career opportunities available to young black women worldwide, so women like me can be inspired to dream big and set their goals high, like becoming a pilot."

She has been dreaming of becoming a pilot since age five, having been inspired by her frequent trips to Jamaica with her grandmothers, who both instilled in her that despite living in the United Kingdom (UK), she is Jamaican.

Bartlett explains: "My grandmothers always taught me that home is where the heart is, and my heart has always been in Jamaica. This is why I am appealing to my beloved extensive Jamaican community to assist me on my pioneering journey."

Bartlett explains: "Living in a global village makes it easier to support people like me who need community financial assistance and I am trying raise funds to pay for my education to become a captain."

Bartlett used to believe she could not become a pilot because of her sex and race. However, determined to press on, she researched how she could achieve her goal.

"The costs for pilot school in the UK is between £80,000 and £S100,000. I applied for the British Airways and Virgin Atlantic Airways scholarship programmes but was unsuccessful. I then began to research other options and found a school in Florida, which answered my prayers.

"The cost in the USA is less than a third in comparison to the UK - US$50,000 (approximately £33,000). The school estimates my living costs to be approximately US$11,000 (£9,000) per year. The course is for two years, and upon completion at the school I have chosen, they will help and support me to get in my chosen career path as a fully qualified pilot."

"So far I have raised £26,000 towards my tuition fee through various fundraising tasks and working overtime. However, I need another £30,000 to complete my tuition and cover all my living expenses."

Bartlett has already achieved outstanding results in her aptitude test and she became further inspired after hearing about the first all-black female crew who operated a commercial airliner from Atlanta to Nashville in the USA in 2009.

"I wish I was on the flight," states Bartlett.

Planning to follow their path, Bartlett said: "The first black female pilot in America was Bessie Coleman, and Maria Ziadie-Haddad became the first Jamaican woman to become a commercial jet airline pilot, when she was hired by Air Jamaica as a Boeing 727 second officer.

"I want to be among the first in the UK. I have researched who was or is the first black female commercial pilot, and I keep facing a blank. Our history is always hidden. I want to add to history."

Concluding that "everything begins with a dream", Bartlett said: "I believe if you find something that you love and are passionate about, you will never work a day in your life. Becoming a pilot is not only my dream, but my passion and one day I plan to be flying among the clouds as Captain Shaneeka Bartlett."

Help Shaneeka achiever her dream by donating to her account at: www.gofundme.com/shanspilotfund.