Residents of Waltham Park and Maxfield Avenue constantly without water 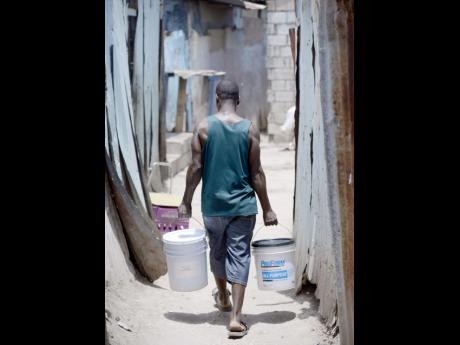 A resident from Frog City in Kingston carries water which is hardly available in his community.

As the drought drags on with no end in sight, some urban communities located not so far from the source of the precious commodity are constantly without water.

Residents of Maxfield, Waltham Park and adjoining communities are literally thirsting for water, trudging the streets with pans, jars, buckets and just about anything else.

Speaking at Wednesday's post-Cabinet press briefing, Buchanan said last week's freak storm had a devastating effect on supply in more ways than one.

"It disrupted the power supply, and for 24 hours, we had no power at Tulloch Springs, Bybrook, White Marl, Ferry, Coopers Hill; Molynes and other critical areas," said Buchanan.

"We could not move more than 18 million gallons of water that we had available, but we could not get to come into the Corporate Area because of that," he added.

Buchanan said that there have been a few other "instances and hiccups" since then.

"When you are operating your water supply network in these abnormal conditions in which the pressure fluctuations in the pipeline are very wide, you will end up with an increased frequency of breaks on our lines.," he said.

Added Buchanan: "Since last week, we have had situations where transmission lines have broken and we have had to intervene to repair them, unfortunately disrupting supply to persons."

Buchanan said the NWC was also aware of complaints from some customers who are not getting water at times when they are scheduled to receive.

"There will be some areas that, despite the best efforts and schedule that we have put in place, will not be able to receive piped supply simply because of where they are on the network," he said.

Buchanan cited elevations of communities as well as the time required for the system to charge to get to them.

"We had hoped that those would be limited," said Buchanan.

He said that NWC technicians have also encountered problems that have worsened the drought woes.