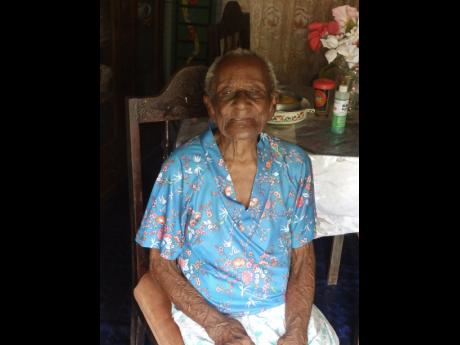 A smiling Agatha Payton poses for the camera. 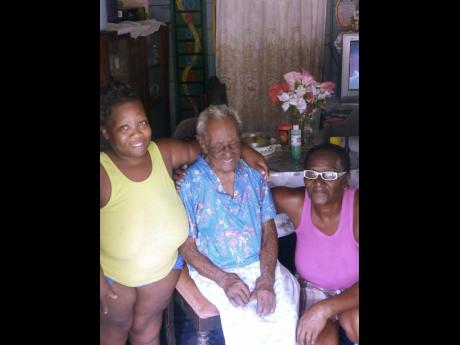 A laughng Mum surrounded by her neice Deloris McKoy (right) and friend Nadine.
1
2

In a small community called Old Pera in St Thomas, lives a beautiful soul known to many as Mum who celebrated her 105th birthday last Friday.

And though she has weathered many, many storms, she was more than able to spell her name for Family and Religion.

Family members explained that Mum, though weaker than she was a year before, is still able to carry out small tasks on her own.

"She can bathe and feed herself. She walks around the house and goes to the bathroom without help," said Deloris McKoy, niece of the centenarian.

Mum's only child, a girl, had died some years ago. Since then McKoy and a lady who only goes by Nadine have been taking care of her.

When Family and Religion asked Mum about her age she gave a hearty laugh.

"Last Friday gone, I am 105 years old!" she said, trying to contain herself.

Mum expressed that she's glad to be alive and thanked and praised God for sparing her life to see such an unusual age.

Coupled with God's grace and mercy, she credited her longevity to various foods and bush teas she usually consumes.

"I use to drink a lot of bussu (small freshwater shellfish) soup and eat wild hog and coney meat," Mum reminisced.

She then went on to advise on the various bush teas and their uses.

"The marigold bush tea is good for 'billiasness' (a term Jamaican use to describe a state of dizziness and nausea). Then you have the vervine (vervain) bush tea that cleans your system and the soursop leaf that's good for your pressure," advised the woman who has over a century's worth of experience.

Though we have no control over how long we live, Mum said she knew she'd live to see many many years.

"When I was working at a place called Hill 60, a 'reader man' from Arcadia approached me and asked to hold my hand," she started in her now familiar storytelling style.

After she was assured by the 'reader man' that there was

nothing to be afraid of, Mum succumbed to his earlier request.

Mum says she believed every word that he said and her age is a testimony that everything came to pass.

The centenarian is now a well-known woman in her community and those neighbouring Old Pera.

Residents of the small district describe her as an entertaining woman.

"Mum always has a story about when she was young to tell us," said one of her neighbours who attended the get-together held to celebrate another year in the centenarian's life.

Another person mentioned that she still reads her Bible.

That got Mum to reminisce on the day in 1962 when she got baptised.

"I used to go to parties but when I got saved, I lost interest," she began.

"I remember pastor provided a box and told us to put any questions we had in it and that we shouldn't put our names. My question was, does religion makes you pleasureless?"

She says though his answer stated that it doesn't and that it all depended on how one behaves themselves, she still didn't see it right to attend parties.

Before leaving to eat her noodles, Mum had a few words of advice for young people: "Live good and do good. Always be kind to each other."