AME Church and AME Zion Church are not the same 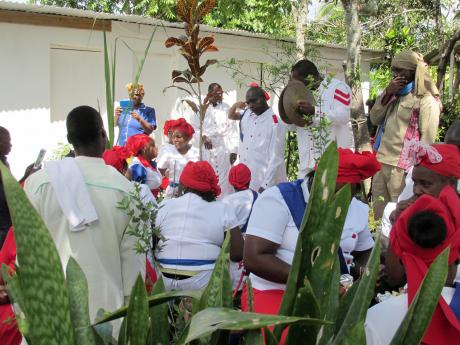 Paul Williams
Some members of the Hill Sixty AME Zion Church from St James at a quarterly conference at Watt Town Zion Headquarters in St Ann earlier this year.

Both are independent of the Methodist Church, which started in England, and spread to the American mainland about 1765. The first chapel was built on John Street in New York city. Black people were involved in the setting up of the church, and their numbers grew with the church.

However, racism was rife among the congregations, and black people were denied certain church privileges. Among other acts of prejudice, they could not take the sacrament until white members were served. Blacks were not even allowed in some congregations.

Spurned by racism and the tension that it brought, some black people, still wanting to follow the Methodist doctrine, set up the African Methodist Episcopal Church. African, because it was set and started by black people; Methodist, as the Church's root are in the Methodist Church; and Episcopal, for it operates under an Episcopal form of Church government, in which the denomination leaders are bishops of the Church.

Reverend Richard Allen of Philadelphia, Pennsylvania, was said to be the founder of the AME Church, and was consecrated its first bishop in 1816. The denomination had grown out of the Free African Society, started in 1778 by Allen, Absalom Jones and some other black people. They founded the Bethel African Methodist Episcopal Church in 1793, and in 1816 formed the African Methodist Episcopal Church.

Around the same time, Allen was setting up the AME Church, another black Methodist movement was creeping away from the Methodist Church. The first church was set up in 1996, and a building called Zion was erected in 1800. It is said Zion was chosen because, "it was the name most frequently used in the Bible to designate the Church of God". James Varick, its first bishop, is credited the founding father of the Zion Church, which was incorporated in 1801 as The African Methodist Church in New York.

However, the existence of the two denominations with the same name caused much confusion. So, in 1848 the general conference of The African Methodist Church in New York decided after a vote to make Zion a part of the denominational name, making it distinct from the AME Church, founded by Rev Allen.

Zion Methodists believe in the basic rules of Methodism; in the spirit of evangelism ... that operate in the areas of thought, feeling and action; in the practice of democracy and brotherhood in all relationships; that every man is a free man and should not be shackled by chains of discrimination and prejudice; in every man having a full opportunity of exercising his spiritual and natural gifts within the Christian fellowship.

The AME Zion Church accepts members from all races, and is now supervised by 12 elected bishops. Apart from the United Sates, it has branches in Canada, England, Africa, India, South America, and the Caribbean. Right here in Jamaica, the AME Zion Church is closely affiliated with the Revival Movement. In fact, many Revival churches have AME Zion Church as part of their official names. Their rituals and services are more Afrocentric than Eurocentric.