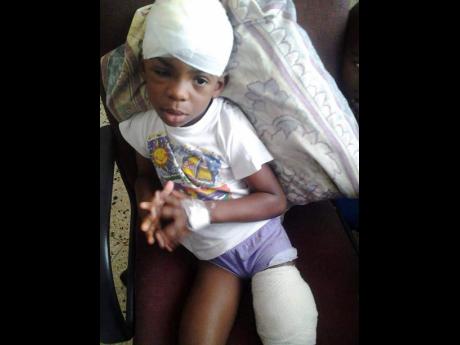 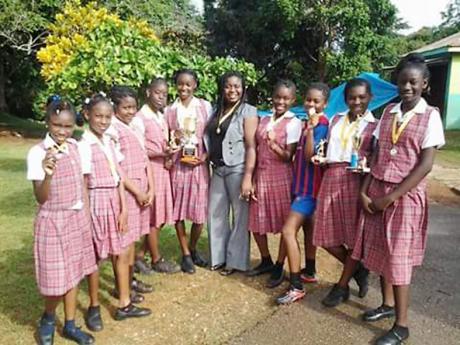 Contributed
Tomlinson (centre) with her pride and joy - her students. 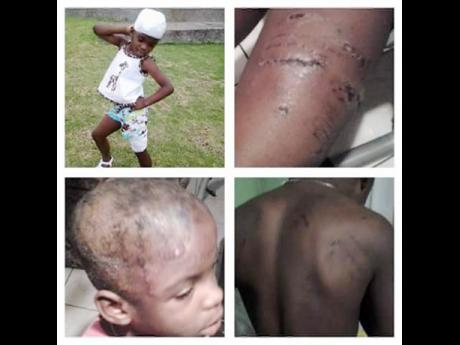 Contributed
Taj-Lees horrible ordeal left her with seventy stitches after being mauled by a pit bull. 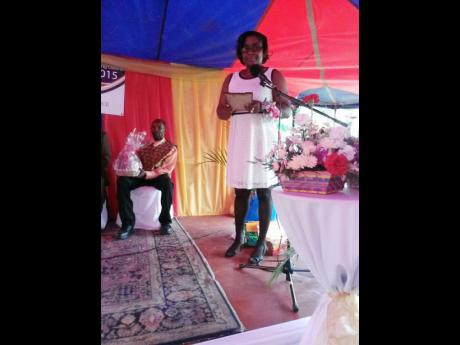 Contributed
Sharon Tomlinson has had many trying moments but she has never lost her faith in God.
1
2
3
4

I stood and watched my daughter scream 'Mummy, help me' as her eyes rolled over and she went silent, tears flowing from her eyes ... ."

This began Sharon Tomlinson's account of having to witness her five-year-old daughter being mauled mercilessly by a 57-pound pit bull in a friend's backyard.

What started out as a beautiful day ended with tearful eyes and tainted hearts, but thankfully and more importantly, a testimony.

"On March 1, 2014, while my son was participating in the Digicel Grassroots Football programme at Manchester High School, I took my two younger children to visit a past student who was having social issues. My five-year-old daughter, Taj-Lee, who always behaved adventurously, ventured around the back of the house, where 'Sadam', the pit bull, was chained, to play with him while we were indoors. My last child, who was four years old at the time, ran to tell us that the dog was biting Taj-Lee. The owner sprang from her seat and I followed. When we rounded the side of the house, Sadam had already ripped her scalp off of her skull and had her left leg in his mouth tossing her about like a rag doll."

For a split second, Tomlinson froze as her daughter screamed for help, but then, without giving it any thought, took the 'bull by horn' and sought to rescue her child.

"I lost fear and gathered strength. I ran over to the dog and grabbed him, not knowing that once the dogs bite down, their jaws lock. The owner picked up a truck rim and dropped it on his head, to no avail. I grabbed the dog around his throat shouting 'Let her go!' Nothing. In order to save her, I had to rip her leg from his mouth and the blood was spewing like a broken pipe."

At that very moment, Sharon began praying and speaking life over her child. The possibility that her precious daughter would leave her was not a thought she was willing to welcome.

"On the way to the hospital, she kept saying, 'Mummy, I am sorry'. My heart was breaking. She kept slipping in and out of consciousness, and a voice said sing 'Jesus loves me this I know', and I coaxed her to sing. Also, I kept asking her whose birthday it was, and she said 'Tajaun'. I prayed as we sped along the road with flashing lights to the emergency room."

As five nurses and doctors fought to save her daughter's leg and life, all Tomlinson could do was hope for the best and look to the Master Healer.

"She received a total of over 70 stitches in her head and on the left leg in a four-hour procedure. She was sedated but never slept. She recounted the ordeal and the doctor was amazed and asked if she was autistic. But God is good. The

X-ray she did after, showed no internal damages," Tomlinson recounted.

The principal of the Charagape Elementary School has had her fair share of obstacles - from having three siblings die at a tender age, seeing a breakdown in her family structure, caring for her mentally ill mother, moving from Guyana and settling in Jamaica to even experiencing a student dying in her hands. But she maintains that one should never doubt God and holds Him as the ultimate author of her life.

"Last year, my car was seized for failing to pay my taxes on time. In November 2014, a biopsy showed squamous cells on my cervix, and on June 26, 2015, after completing an MRI (magnetic resonance imaging) of my neck, it showed that my cervical bones were degenerating, which was causing the numbness in my right side and other parts of my body. Through everything, I am still working and making ends meet because, through all of my trials, and some I have not listed, God has still taken care of me. I never got a chance to doubt Him because those who know me well will testify that I am overly positive, thankful, and always seeking a solution."

She added, "I am happy for my family and friends from Guyana. God has blessed me with four dynamic children for whom I live, and all that I earn is for them."