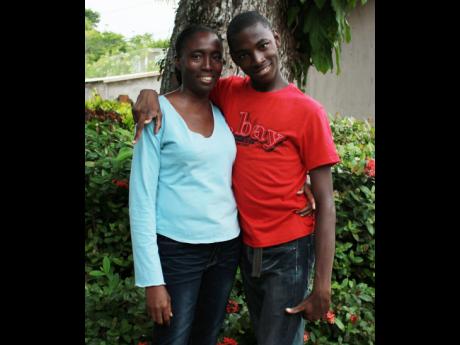 When Darnell Jackson was born, the doctors at the St Ann's Bay Hospital told his mother, Nezetta Martin, that her son was disabled. But it would take another nine years before he was ultimately diagnosed with a group of permanent movement disorders known as cerebral palsy.

Martin, from Mason Hall in Oracabessa, St Mary, has clearly enjoyed watching Jackson mature from a boy into a young man, but remembers struggling to cope in the early days.

Speaking with Family and Religion earlier this week, she said: "It was frustrating, but because I didn't have a child, I was a very happy mother. Anywhere the doctors told me to go, I was there.

"To get to the specialist doctor in Kingston on time, we had to leave the house at 4 a.m. (laughs), and after that we had to go to the Caribbean Hearing Centre because [Darnell] had a hearing problem.

"Those days were stressful and a bit hackling, but we are in a close family which helps a lot and his father plays a big part in his life and has never left us out."

Martin Jackson,17, completes many tasks unaccompanied, including travelling to school, which he has done for the past four years. However, she recalls feeling petrified when he first suggested making the trip by himself.

She said: "When he first started, I carried him to and from school and then chartered a taxi to pick him up in the mornings and after school, but I had problems because they were late sometimes, which was really nerve-racking.

"Then, one morning, he said to me: 'Mum, I can go to school by myself.' I said 'OK,' gave him some time and called the principal to ask if he'd arrived yet. When she replied 'No, Miss Martin', my heart sank, but then she saw him and it's been OK ever since."

While understanding her son's disability was exasperating, Martin claims that dealing with insensitive adults is an even bigger chore. "The most difficult part is when others don't really understand," she explained.

"It's like some parents look down on you because you have a sickly child, but I comfort myself with the knowledge that God chose me especially, out of all the other parents, to have a special child, so because of that, my son lets me shine."

Martin believes the Government could do more to support young people with cerebral palsy. She advises new and young parents of disabled children to be patient and resilient.

She said: "I think a lot more can be done for us here in St Mary because, in terms of support services, we've been left on our own. At times, it's really hard to find even the taxi fare to send [Darnell] to school. It feels as though children with disabilities on this side of the island are being left out.

"If you have a sickly child, trust God and don't give up because you are not alone. Learning to parent isn't easy and it's not something you learn overnight. It takes time, is stressful, and sometimes makes you feel like giving up.

"But just watching your child grow up is amazing. Every day Darnell does something different, so I'm excited to see what he's going to do next."