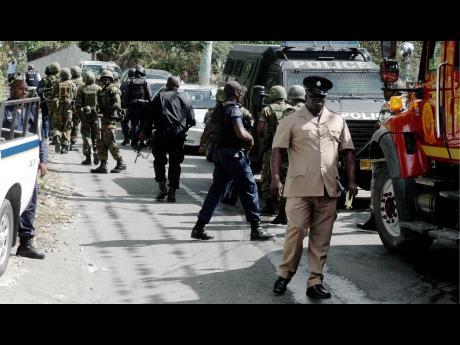 File
Members of a joint police-military team patrol Salt Spring, St James, during a flare-up of violence in the community in December 2006.

Against the background of an upsurge in crime two St James members of parliament have called for meaningful social intervention to help end the bloodletting across the parish.

Chang says while it is important to give the police the support needed to immediately stabilise the situation in crime-torn communities, there has to be social intervention programmes aimed at moving these communities in a new direction.

Endorsing the need for social intervention initiatives, Smith says something has to be done to help young persons across the parish understand that they can solve their disputes without resorting to violence.

He also announced plans to start a mentorship programme that will target 100 at-risk young people in St James.

Meanwhile, the police commissioner met with his top divisional commanders in western Jamaica yesterday to discuss measures that have been put in place to curtail the recent upsurge in violence.

Williams told journalists after the meeting that his visit to the parish was part of an attempt to provide the local commanders with additional support.

In addition, he says it provides an opportunity to help fine-tune the crime fighting strategies going forward to ensure that the intervention is meaningful.