Over 300 arrested for electricity theft 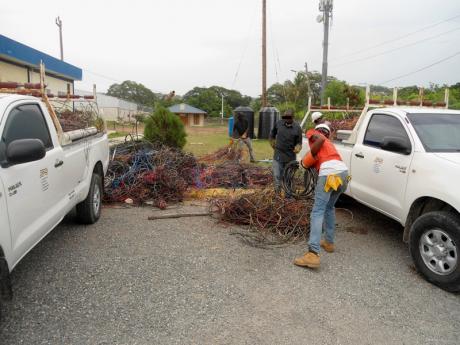 Over 300 persons have been arrested for illegal electricity abstraction up to July 15, the Jamaica Public Service Company (JPS) says.

In a release this afternoon, the light and power company its "crews have been relentlessy pursuing the perpetrators of electricity theft". This has resulted in 304 persons arrested for the illegal abstraction of electricity and some 9,512 throw-up lines taken down.

"On Tuesday July 14, the teams’ latest move saw the St Catherine community of Windsor Heights in Central Village, being rid of 850 throw-up lines. One man was arrested, but several others fled from their residences to avoid being associated with the illegal connections," the release says.

According to the JPS, nine persons were brought before the Spanish Town Resident Magistrate’s Court, for the illegal abstraction of electricity on June 30. Six of them pleaded guilty and were fined an average of J$150,000 each or six months in prison.

On July 1, another five persons were brought before the Linstead Resident Magistrate’s Court, with the same charge. Four pleaded guilty and were also fined an average of $150,000 each.

The JPS is reminding non-paying users of electricity that regularization is a straight forward process. "The company is also anticipating that its Community Renewal programme in seven communities in Kingston, will assist in creating sustained regularisation, through public education and practical assistance (such as house wiring), among other measures."