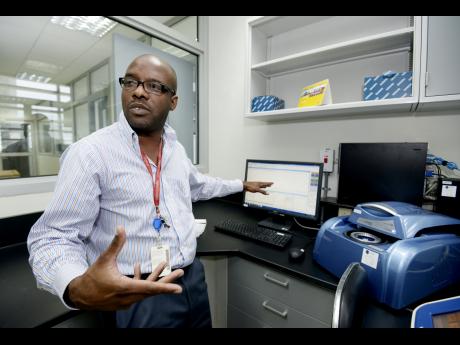 With the summer months always seeing an increase in demand for paternity testing, one regional DNA testing facility is contemplating stocking local pharmacy shelves with paternity kits for the benefit of suspicious parents with something to prove.

According to chief DNA analyst at Caribbean Genetics (CARIGEN), Compton Beecher, while this will be a change from their policy of supplying only medical labs, a recent decision to stock one of the major pharmacies in the Corporate Area is already generating encouraging results, despite the $32,000 price tag per kit.

"You basically just go in and you buy a kit off the shelf," Beecher told The Sunday Gleaner.

"You can get the same kit at any lab or any one of our lab partners that we are associated with, but the pharmacy is just another way of reaching to the client," added Beecher.

Now the forensic expert says that discussions are under way with other locations, so that the answer to the question that continues to plague several Jamaican men and women can be found in more pharmacy aisles.

"We are actually looking at a couple more pharmacies to see how that works. We have approached a couple more, but we haven't yet signed up any contract with them."

Headquartered at the University of the West Indies, Mona, CARIGEN supplies DNA testing services to at least nine countries in the region, whose citizens often visit partnering labs to have their samples collected and then sent off to be processed.

For Jamaica, Barbados, St Lucia, and Grenada, most of the cases have been referred through the courts.

While Beecher would not confirm or deny claims that misattributed fatherhood is common in the region, based on the results generated at the facility, he said the increase in the number of fathers seeking paternity tests over the years suggests that a significant number of men are convinced that they might have been given the colloquial 'jacket'.

"People are just not sure, and with the whole economic situation, a father doesn't want to be supporting a child, knowing that he can put his money elsewhere," said Beecher, who sees the majority of requests in summer and December.

A client can either purchase a do-it-yourself paternity kit, which would allow him to test his child at home without his partner's knowledge, or he can have a test done at the lab or at the pharmacy.

While the personal test costs around $36,500 when purchased at CARIGEN, the test which is required by embassies and the courts costs $38,500.

The sale of do-it-yourself paternity kits at pharmacies has led to concerns in some countries, given their potential to complicate or alter family bonds. However, Beecher argued that the company is merely providing genetic and biological clarity for those who have their suspicions.

"There must have been some questions; that's the only reason why you are doing a test," he asserted.

Dr Wayne West, chairman of the Jamaica Coalition for a Healthy Society, is not opposed to the availability of quick and easy paternity testing either, although he feels it can create challenges.

"I think truth is always a good thing to know and to be aware of. I think there are consequences to truth, some of which may be negative, but a society that is founded on truth and that is free of lies is always a better society than one that is not," argued West.

Chairperson of the National Family Planning Board, Dr Sandra Knight, would much rather that paternity tests be done at a doctor's office, but she believes the accessibility of these products could possibly encourage women to be more truthful about their child's paternity.

"Men have emotions, too, and men have rights, too, and one of the rights they have is to not be deceived," she said.

A study conducted by Dr Sonia King in the Pathology Department at the University of the West Indies in 2002 revealed that about one in three, or 33 per cent, of all men tested were not the biological fathers of the children in their families.

Information gleaned from a diplomatic cable sent from the US Embassy in Kingston to its headquarters in Washington in 2009 showed that at least 10 per cent of Jamaican men who filed for children between March 2009 and August 2010.