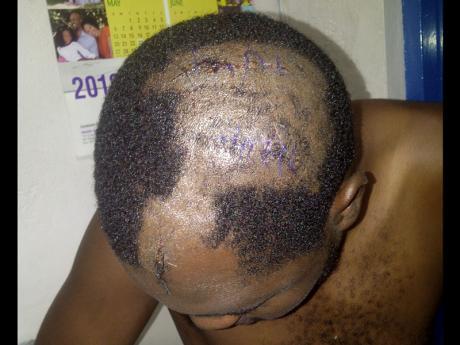 File
This 2012 photo shows injuries to 'Livity' Coke's head reportedly inflicted by soldiers at the Horizon Adult Correctional Centre. he has filed an appeal seeking to quash a ruling by the Constitutional Court dismissing his application for compensation.

Businessman, Leighton ‘Livity’ Coke has filed an appeal seeking to quash a ruling by the Constitutional Court dismissing his application for compensation for the beating he received from soldiers at the Horizon Adult Remand Centre in 2012.

But Coke, who is the brother of former west Kingston crime lord Christopher 'Dudus' Coke, is contending that the judges erred in certain elements of their rulings.

He says they were wrong when they found that the soldiers did not breach his rights when they beat him on February 21, 2012.

He is also contending that the judges erred when they found that he was not subjected to torture, degrading and inhumane treatment.

In addition, Coke is arguing that the judges erred when they found that the solders did not, over a period of time, issue threats to him,  deprived him of basic necessities such as sleep, food and water and caused him to bathe naked in front of a camera.

He further said the judges erred when they found that the actions complained about did not amount to torture.

Coke and five high-risk prisoners had alleged that they were severely beaten by the soldiers.

However, the Jamaica Defence Force had argued that Coke received his injuries while being restrained after he attacked three soldiers.