The police are our friends - inner-city youth 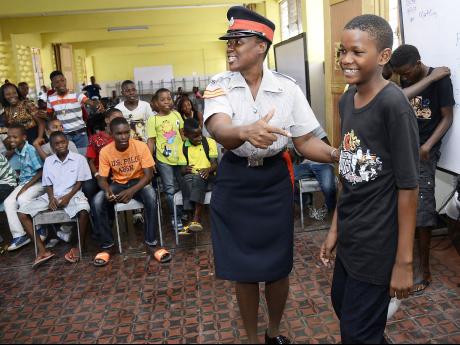 Corporal Jerr Johnson-Heron (left) and Tajae Martin (right) take part in an activity on Friday at the Kingston Technical High School on Hanover Street in Kingston. The Kingston Central Police Division teamed up with the Children First Bashy Bus Crew to stage a summer camp programme.

When 15-year-old Marc Waugh from Allman Town, Kingston, was asked if he believed the police were his friends, he responded with a resounded "yes".

Waugh was one of this year's participants in the Kingston Central Police Division summer camp programme, which has been active for more than 12 years. On Friday, the two-week programme came to a close at the Kingston Technical High School, during which various presentations and games were held.

According to Corporal Jerr Johnson-Heron, the programme's main aim was to "help inner-city youths and for them to see that the police are their friends".

The summer camp was hosted in collaboration with the Children First Bashy Bus Crew, where they help youths ranging from age 10 to 24 to interact with other individuals from different communities in and around central Kingston.

A facilitator from the Bashy Bus Crew, Deidre-Ann Miller, stated that the programme teaches youth mostly about life skills, arts and craft, and communications. She said based on the actions and attitude of the participants, she can confidently say it has been effective.

"It keeps you off the streets," said 20-year-old Odette Williams from Rose Garden, when asked how she felt about the initiative, adding that it has influenced her to continue her studies at the HEART Trust/NTA in September.

For 12-year-old Shaylee Thompson, the project has made a difference in her life.

"It has taught me about controlling my self-esteem," said Thompson, adding that she learnt the importance of fulfilling her educational goals, which she looks forward to continuing in September at the Wolmer's Girls' School.