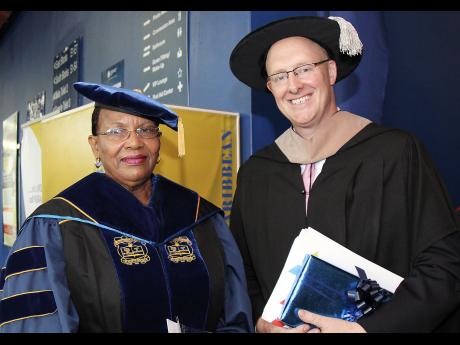 "In order to achieve success, you have to want it more than the next person," he said. "So, whether you choose to join an organisation or start your own business, you have to always be hungry for success ... that is the reality of the world you are entering."

Butler was guest speaker at the University College of the Caribbean's (UCC) 2015 Commencement Ceremony at the National Indoor Sports Centre on Sunday. He gave the more than 600 graduates four other pieces of advice, including not to think of their professional life as ladder to be climbed.

"Whatever you aspire to do, don't try to plot out a direct line from here to a predetermined goal," he said. "That approach is almost guaranteed not to get you where you hope to go." He suggested they commit themselves to what they believe to be important, and that success will follow.

"Remember that success may look different from what you had initially imagined. But it will be success on your terms." Butler also encouraged the graduating class to be willing to re-invent the wheel, think about how to move on after failure, and to never forget their support system.

President of UCC, Dr Winston Adams, reiterated the theme of the ceremony, 'The world is your stage', and challenged graduates to find their voices and speak the truth responsibly.

"Do not be afraid to try new paths," he said. "Do not be afraid to, take calculated risks because, if you don't, you will never know how great you can be!" He noted that in the 2015 spring semester, UCC moved from their online platform to offer classes on the Massive Open Online Course (MOOC). Three UCC courses were offered via Coursera (the world's largest MOOC provider) and other platforms. Dr Adams revealed that the take up by students locally for this pilot programme was greater than projected.

"Soon, we will also have a student profile which is global," he said. "In so doing, your alma mater is also now partnering with pioneer institutions such as MIT, Harvard and Stanford that are spearheading the movement to make quality education available to anyone who needs it anywhere in the world."

In addition, he said the institution now had a model to be used in tandem with the existing UCC online platform to deliver future cutting-edge and relevant programmes. He noted that the institution had strived to make its voice heard by applying a careful and systematic approach to growth.

"As a result, our programmes are now well-reputed and we are recognised as an institution that delivers high-quality graduates. Despite our comparative size, we have graduated over 65,000 professionals who are prepared to tackle the challenges of the day," he said.