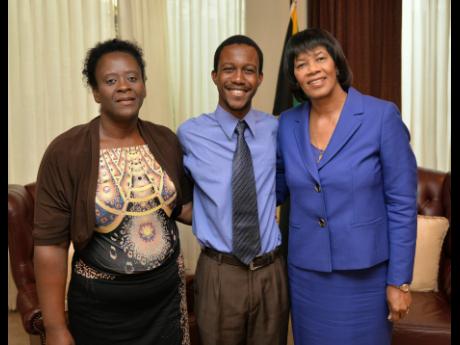 JIS
A beaming Jovante Anderson (centre), and his mother, Nola Smith (left) share a moment with Prime Minister Portia Simpson Miller, during a courtesy call at Jamaica House recently. Anderson was named the 2015 awardee of the four-year Lafayette College-Jamaica Scholarship, established in honour of the prime minister. 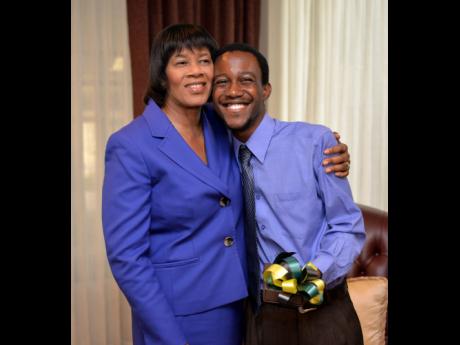 JIS
Jovante Anderson beams with pride as Prime Minister Portia Simpson Miller congratulates him on being named the 2015 awardee of the four-year Lafayette College-Jamaica Scholarship.
1
2

Nineteen-year-old Jovante Anderson is looking to make his mark in the field of speech therapy in Jamaica.

The youngster is the recipient of the 2015 Lafayette College-Jamaica Scholarship to pursue a four-year undergraduate programme at the Lafayette University in the United States, after which he intends to pursue a master's degree in speech language pathology.

He is pledging to return to the island on completion of his studies to help as many Jamaicans as possible afflicted with speech impediments and disorders.

Anderson, who recently completed sixth form at Ardenne High School in St Andrew, is a high achiever. He earned 10 grade ones in the Caribbean Secondary Education Certificate (CSEC) examinations, and five distinctions for Caribbean Advanced Proficiency Examination (CAPE) Unit One. He is currently awaiting results for the CAPE Unit Two.

Jovante said he was happy to be the second recipient of the Lafayette-Jamaica Scholarship, which was established in honour of Prime Minister Portia Simpson Miller.

"I'm elated to be

so honoured and to

be given this opportunity," he said after he and his mother, Nola Smith, paid a courtesy call on the prime minister at Jamaica House recently.

"I will be majoring in psychology and English at Lafayette. After that, I want to read for a master's in speech therapy or speech pathology, then come home and help create greater access for

persons needing this service," he said.

With only five speech pathologists currently operating in the country, the former Ardenne High deputy head boy said that there are not enough of these specialists to serve the many Jamaicans afflicted with speech disorders.

He said he was a perfect fit for a career in speech pathology as he is passionate about the power of words and language, and verbal and non-verbal communication.

"I'm looking into going into that field and working extensively with people who have developmental and speech disorders, swallowing disorders, autism or stuttering. There are many persons whose lives can be improved. I wake up wondering what my practice will be like. I can't wait to get started," he said.

Specialist in the field of speech pathology, Deniece Williams, said that it was commendable that Anderson had decided to focus his studies in this field as there are many Jamaicans in need of speech therapy.

"I am thrilled that he will be pursuing these studies and he will be a wonderful addition to the field, as we need more of us to serve the growing numbers of adults and children with communication disorders," she said.

Anderson's mother said she was confident her son would achieve his goal.

"He works very hard and I know he won't disappoint his family or his country," she said, noting that he is a source of inspiration for his siblings and has spurred many in his community to strive for high academic achievement.

Anderson, who leaves the island in August to take up his scholarship at Lafayette University, hailed the prime minister, whom, he said, has been a "tower of inspiration".

He said that knowing that it was through her efforts that he is now the beneficiary of a scholarship made the meeting with her even more special.

"It's something I'll remember for the rest of my life. She was very easy to talk to, very down to earth. I'll always remember her words of encouragement to me to never forget what God can do. I'll take those words to Lafayette with me," he said.

"I'm really looking forward to studying at Lafayette and to achieving my goal to being a global citizen, and represent (my country) on a global platform, challenging myself and going past my boundaries," he added.

Lafayette is a top American liberal arts college in Pennsylvania that offers a wide range of undergraduate degree programmes. It has one of the highest endowment-per-student rates with significant resources to fund student research and provide opportunities for study abroad, internships and fieldwork.

The Lafayette College-Jamaica Scholarship was established to mark the Jamaican prime minister's visit to the college in May 2014, where she delivered the keynote address at the institution's 179th commencement ceremony.

Scholarship awardees receive full financial support of up to US$60,000 per year or US$240,000 over four years. In addition, a US$4,000 stipend is awarded that may be applied towards a Lafayette study abroad experience.

The first award under the Lafayette College-Jamaica Scholarship programme was made in 2014 to sixth-form student at Campion College, Rojhae Panton, who is pursuing studies in chemical engineering.