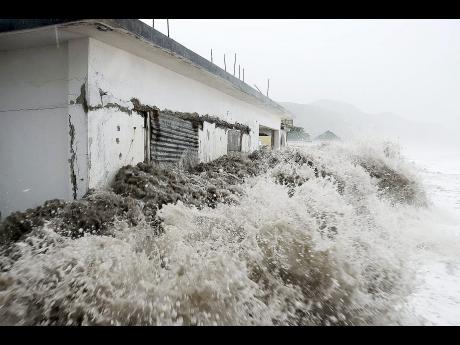 File
Ferocious waves crash against this abandoned house in Carribbean Terrace in St Andrew when Jamaica suffered the effects of Hurricane Sandy in 2012.

Professor Michael Taylor, head of the Climate Studies Group Mona, has urged policymakers to become proactive in dealing with issues of climate change, indicating that the country is currently facing what he describes as an "expansion of vulnerability diminishing capacity".

He noted that climate impacts would continue to increase and, as such, citizens must be aware and educated.

"When we look at the period 2001-2012, you will realise that we never got a break (storms and hurricanes), not only because of the frequency of storms but because of the magnitude," the professor said following the JA REACH Climate-Smart Agriculture Symposium recently.

"In the first instance, there will be increased exposure of people and various sectors of our country to the impacts of climates, and this will increase as we continue into the future. I do believe, however, that in the midst of these occurrences, we still have a viable future, but that will depend on if we act now," he declared.

But even as he predicted a viable future for the country, based on the immediate action, he noted that the country had entered into a new climate regime, and his answer to whether or not things would get back to normal was a simple "no".

"When we look at rainfall, it still remains variable; however, it has been on a dry trend. We are seeing where annual rainfall may reduce by up to 55 per cent and a reduction in the length of the rainy season. In addition, we will not necessarily be expecting more hurricanes but we are expecting more intense hurricanes," the professor said.

"Issues of sea level rise will also be evident, which will eventually lead to certain points in Jamaica becoming very vulnerable and, of course, land will be lost, people will be displaced and all our coastal infrastructure threatened," he continued.

He therefore noted that "a national sector plan will be critical and it must pay homage to mitigation. Adaptation is also critical and, most important, education. You can have the best plan but unless persons are educated and there is awareness then we will have little or no success."