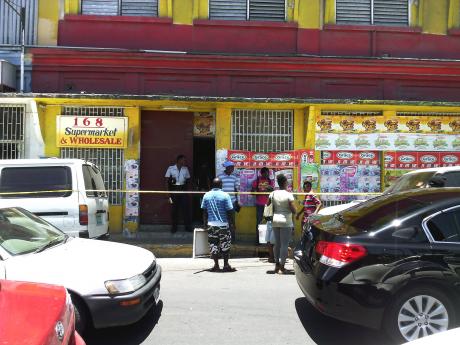 Gareth Davis
The cordoned area at 168 Supermarket and Wholesale, which was robbed by four men yesterday.

A daring daylight robbery of a supermarket in Port Antonio, Portland, by armed thugs, has further compounded frustration among business operators and other residents who are calling for swift action from the police to restore normality.

Regarded as the most peaceful parish islandwide, Portland is now experiencing a new kind of crime, which has left the business community on edge. Other business operators are expressing fear that the surging gun-related crimes could also turn up at the steps of their facility unless the police, who have sworn to protect, serve, and reassure, act swiftly.

"I am still in shock as to what is taking place here in Port Antonio," commented Paul 'bigga' Young, a businessman.

"We have never had this kind of crime before. Business operators are being tied up and robbed at gun-point by thugs, who then make their escape without leaving a trace. I want to know what kind of crime strategies will be put in place to combat these daylight robberies. It cannot be business as usual for the police as other crimes, including robbery of ordinary residents coming from parties and wakes at nights by armed thugs, remain unsolved," he added.

Yesterday, four men, one armed with a handgun, reportedly entered the 168 Supermarket and Wholesale on West Street in Port Antonio at about 8:45 a.m. and locked the entrance door with four persons, including a customer, an employee, along with the owners (husband and wife) on the inside.

It is alleged that the men tied up the four people before robbing approximately J$430,000; US$3,000, assorted liquor, cigarettes, and smart phones. The men also removed the surveillance recorder before making their escape.

According to the police, yesterday's robbery is consistent with what took place on June 7 at TAJ pharmacy, also in Port Antonio, when two men, one armed with a handgun, tied up the owner, an employee, and a customer before robbing approximately $700,000. In making their escape, the men also removed the surveillance recorder.

The targeting of business operators by armed thugs is seriously derailing the crime-fighting efforts of the police, which are headed by commanding officer Superintendent Wayne Cameron, who has managed to gain the confidence of many residents.

But with Cameron scheduled to be transferred to St Ann next week, many are now concerned about what new crime fighting measures will be implemented by his successor, who will not be afforded any breathing space, especially with the surge in crime.