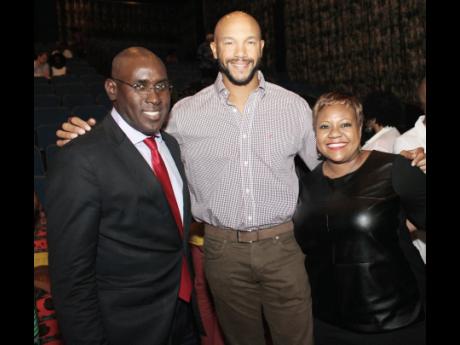 Contributed
Stephen Bishop (centre), who stars in ‘Being Mary Jane’, relaxes with Cedric Blair, managing director of Red Stripe, and Nasha Douglas, brand manager for Smirnoff, at the opening ceremony of the Jamaica Film Festival at the Courtleigh Auditorium recently.

Red Stripe, through its Learning for Life programme, will be adding a new course to the curriculum after being positively impacted by the recently held Jamaica Film Festival. The festival saw a week of screenings and panel discussions in which many local screenwriters, film-makers and producers were given sound advice from international industry stalwarts.

Cedric Blair, managing director of Red Stripe, revealed that, in 2016, as part of Project Entrepreneur, the company would introduce the Business of Film.

"We will be working closely with JAMPRO to develop this as a best practice, covering all areas relating to the film industry, from accessing funding to showcasing the contributions of the creative sector to the country's attractiveness, economic and social development. Red Stripe encourages both existing and aspiring talent to continuously seek to become the best and the brightest of the industry and maintain the same level of vibrancy our culture is known for," Blair said.

Red Stripe Beer has received worldwide feature and recognition in many local, regional and international films. As such, the company has decided to take it a step further to ensure that they help to play a role in paving the way for local talent and showcasing some of these on the big screen.

"Jamaica's local talent in the areas of directing, scriptwriting, producing and acting can compete anywhere in the world. Our natural resources are the envy of most and can attract a huge chunk of the US$1.2 trillion worth of international film business. The Jamaica Film Festival is a great initiative that will capitalise on all this and in the short, medium and long term, will help to fuel our local economy," Blair continued.

He also revealed that this is more than a one-time partnership and, with the help from other sectors, they will be able to achieve great things.