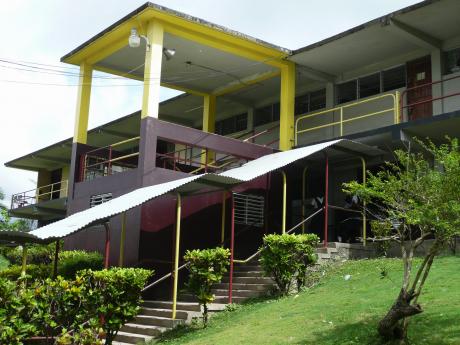 File
A section of the St Thomas Technical High School.

St Thomas Technical High School could save millions of dollars in utility and food bills through a system known as premaculture, which the backers are hoping to introduce to the school.

There are several definitions for premaculture because it is said to be dynamic, but one definition is the designing of human systems based on ecosystems, or using nature as a model to foster development. St Thomas Technical High School is poised to host the first premaculture system to be implemented in a Jamaican school.

Nicola Phillips, country director for Jamaica Sustainable Farm Enterprise Programme, said the system is being designed under an Ecological Restoration Project for the school.

The project is being directed by Mario Yanez, a premaculture designer from the United States, who is also working in collaboration with the locally based Source Farm.

According to Yanez: "The programme is looking at ways in which the school can begin to repair its ecology, grow a lot of its own food, create learning opportunities for students while saving a lot of money in the process."

Currently, the school pays approximately $8 million per year for electricity and water bills, and Yanez says this can greatly be reduced.

"There are lots of opportunity to harvest water. The rooftop and canals can be used to capture many litres of rain water."

According to him, the water captured can be used for drinking, cooking, flushing toilets and also for agricultural purposes.

Yanez also had a solution to saving money spent on gas.

He said: "The system will capture the human and animal waste and also scraps of food and other items that are disposable then turn them into methane gas. This will replace cooking gas used in the school's canteen."

This method will not only provide free gas, but will also eliminate the expense of the monthly removal of sewage.

Though Yanez was uncertain of the exact figure that implementing the premaculture system would cost, he was confident that the investment would pay for itself within a short period of putting the structure in place.

But although this seems like the opportunity of a lifetime, the board of management at the St Thomas Technical High School has not yet given the scheme the green light.

"We're making the proposal and creating the design. It's now up to the school's decision makers to decide on how soon they want to invest in some of the projects, but the information is available to them," Yanez said with reference to the start date of the project's implementation.

In addition to the bio digester, which will be converting the waste to gas, the system will include wind and solar energy.