Lessons from 55 years of ministry 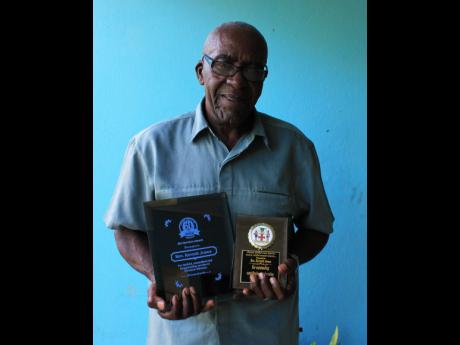 Having acted for the past 55 years as minister and overseer for the Pentecostal Church of God in St Mary, Reverend Kermitt Jones is one of the longest-serving and most respected religious leaders in the parish.

The 79-year-old pastor is a recipient of the Governor General's Award and was recently presented with plaques honouring his contribution to education and lifelong commitment to the Christian ministry.

Speaking earlier this week at his home in Bonny Gate, near Port Maria, Jones outlined the history of the Pentecostal movement in Jamaica and explained why the church became so popular.

He told Family and Religion: "I was born in 1935, grew up about four miles from here, and was baptised when I was 15 years old. In 1958, I spent some time in the United States, where I attended Bible school in New Jersey.

"I returned to Jamaica and, in 1959, was ordained as a minister in the Pentecostal Church of God and became their first youth president. A year later, I became the overseer, and today, myself and Reverend Dunn from Bamboo, St Ann, are the church's oldest ministers.

"Our church was started by two missionaries, Reverend and Mrs Robinson, who came from the United States and met with three ladies in Spanish Town, who came out of the Assemblies of God (church).

"From that one church, we now have 49 across the island, and in 2015, the Pentecostal Church of God celebrates 60 years of ministry in Jamaica."

Jones, who chairs the parish's senior citizens association and works as the chaplain at the Port Maria police station, believes the Pentecostal Church found favour with worshippers in Jamaica because it encouraged them to express their love for God.

He said: "The Religious Society of Friends (Quakers), Baptist and Anglican churches were all here first, and then in the early 1950s, the New Testament and Pentecostal Churches of God, and United Pentecostal Church all came in with a new doctrine.

"In the early days, if you clapped in church everyone would turn around and look at you, but we encouraged people to lift up their hands to praise the Lord."

Several times a year, Jones brings medical staff in from the United States to administer free health care services to local residents. He has launched missions to build houses for homeless people in the area also.

He promised to continue serving because he enjoys: "Looking out for grassroots people and the little man." He advised young pastors to work hard if they want to keep their congregations engaged.

"The days of going to church, sitting down and simply listening to the pastor are over," he explained. "If you're going to keep your congregation, you've got to have something to hold them, just like in the dance hall," he said.

"If an artiste puts a song out, it has to be special because there's a lot of competition. It's like that in the ministry because the competition is great. You have to reach out to the people and have something to hold them. If you're just going to get up and preach, you'll find yourself talking to empty benches."