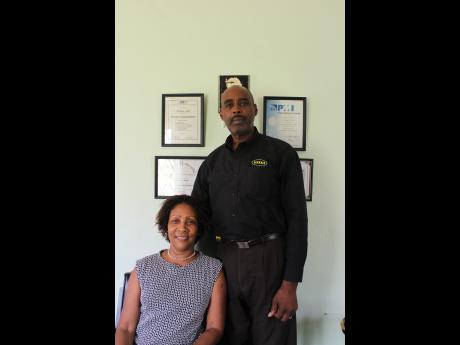 Mt is about understanding each other, respect, and true love. This is the glue that has held together the marriage of Barrington (Barry) Smith and his lady love, Carolyn Russell-Smith, for 38 years.

In 1976, when Barrington first laid eyes on Carolyn, he wasted no time in ensuring that the woman who was pleasing to the eye, intellectually stable, and morally sound would become his life partner.

"After leaving college, I got a job at the Public Works Department in Kingston. I had a contract in Port Antonio, and there is where I met Carolyn, who was on the National Youth Service programme. It was through socialising with her that my feelings evolved and, in 1977, we were married."

Saying that their personalities complement each other, the retired army captain believes it could work no other way.

"We have two different personalities. She is extremely creative and I am more technical. Our personalities are not conflicting, it works for us," he said.

A firm believer in sharing experiences together, Carolyn loves that they have been able to be adventurous in their marriage.

"We have done so much and have been to so many places. Climbing the Blue Mountains still stands out in my mind, and enjoying the company of good friends such as Leroy Gibbon, Annette Clayton and Junior Wedderburn."

She added: "I remember once when Barry had a Mini. We were travelling through St Thomas and when we were passing the Yallahs fording, it had overflowed and the streets were flooded. Now, the Mini had holes in the bottom and, of course, we got wet and we had to be bailing out water. We can look back and laugh now," she said.

The founder of Khulcha Dance Theatre, Carolyn expressed that her undying love for Barry is because he is the human rock that never fails her.

"I love him because he is supportive and patient. Even while I was at Edna Manley studying, he was always there assisting me in every way possible. We worked well together then and we still work well together today."

Said Barry: "God is at the centre of our lives and, as a man of principle, she will never have to worry about me doing many things that men would be accused of doing."

But what else has allowed them to be so in love after so many years?

"Some people go into marriages for the wrong reasons. A happy marriage is not centred on finances; it is important, but should not be the most critical thing. There must be love, respect and a spiritual base, and each partner must want the best for the other," said Barry.

With many persons failing to prepare mentally for how they will deal with problems that arise in their marriage, the couple reminded them that seeking help, if it is needed, is critical.

"It is important to get to know your partner and understand them. Any situation that arises must end with a mutually beneficial resolution. We have had our challenges and we have learned to work it out. We have never gone to a marriage counsellor. But for persons who cannot manage to deal with it themselves, they should not be afraid to seek help."