Rishauna Burt – ‘You’re not too young to serve the Lord’ 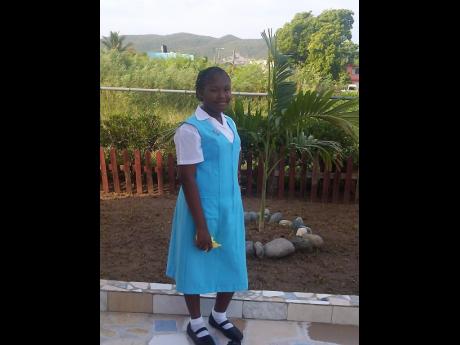 At 13 years old, Rishauna LaChante Burt is already confident of the path she wants to take where her relationship with the Lord is concerned. For most girls her age, it's about the latest gadgets, having a good time, and doing everything else except making a full commitment to serving God.

On June 7, the teen was baptised at the Edgewater Baptist Church in Portmore, St Catherine.

Her conviction came while at a gospel concert that was held at her school - Wolmer's High School for Girls.

"It was almost empty, consisting only of a few second formers, but it had a very powerful message. Most of the people in attendance were saved that day," she told Family and Religion.

When quizzed about her age and the commitment she has taken on, young Burt was firm in her response, "Nobody is too young to worship God. Jesus honoured God from birth. We should be no different."

Since June, Burt said although she is giving it her all in staying on the straight and narrow, she still has the challenge of peer pressure to deal with, especially when it comes to music.

According to her, she had problems letting go of the music to which teens normally gravitate.

"Rap and other popular songs that I knew were sending negative messages and not of God, but old habits are hard to let go," she said, adding that, eventually, with prayer and the help of a friend, those songs were replaced with new more uplifting ones.

When it comes to Christ being real in her life, she said there is a particular experience which stands out.

"I was having a hard time forgiving a friend. I prayed about it and the next day when I saw the person, a sudden peace washed over me. I was in tears right there and then," she shared.

Trishauna gives credit to her parents, Richard and Antoinette Morgan-Burt, who she says are her anchor. When she made the decision that she wanted to be baptised, she said they were really happy for her.

Looking ahead, she says her intention is to continue on the path. She has challenges, but said: "Everybody will have challenges, but all we can do is pray about the situation and trust that God knows what He is doing."