'We will not tolerate same sex marriage' 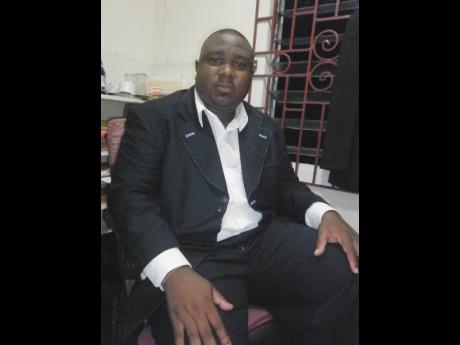 Pastor Dwayne Edwards, head of the ministries of the Grace Chapel Assemblies in Summerfield, Clarendon, has said his ministry will not condone the blatant and morally wrong practice of same-sex marriage.

Edwards' pronouncements come after the US recently legalised same-sex marriage in all states.

"I agree with Bishop T.D. Jakes, who said earlier that this ruling is based on constitution, but the Church is based on the Word of God and we are going to stand against it," Edwards said.

He further explained that the Church's mission is to minister to all people and encourage them not to conform to this world, but rather to be transformed by the renewing of their minds and thoughts.

"Using the Bible as a reference, when we look back at the Old Testament on the story of Sodom and Gomorrah and how God destroyed the land because he wasn't pleased with the behaviour of its people, I believe that if we, as a country, continue on the same trend we are on, that's the same direction we will be heading in. But I will be standing up with God's Word and let His will be done, and if it is to destroy us, then destroy us because the hearts of men have really become so vile."

"The Bible told us that men will become lovers of themselves rather than of God. This whole get-rich-or-die-trying mentality is one of the main reasons that have caused man to be looking to man and woman to woman, but we don't need their money. My God shall supply all our needs according to His riches, so we are not going to bow or subject to no plan of the enemy," he said.

Edwards said he strongly believes the spin-off effects of this landmark ruling will affect developing countries such as Jamaica, because some of the people who indulge in such behaviour are viewed as the powerhouses of their society because of their good financial status. Moreover, he noted that Jamaica has very close diplomatic ties with the United States, and so the persons who do morally wrong by God may end up dictating to the Jamaican Government that relies heavily on their money and investments for our growth and development.

"If you check, you will see our country is so Americanised, even in our dressing and the way we talk, and many of the people in the Jamaican diaspora live there, so it's a strong connection between us and America. Even by just looking at our family, relatives and friends, we will see how close this thing is to us, and if they widely or openly accept it, then it will definitely affect us."

"As a Church, we are not going to fall for it. We will not conform, but we are going to stand on the divine and inspired Word of God. I really want to say to the churches and individual families and the wider society that we should be mindful of what we watch on TV, because I've observed that even in cartoons, the practice is being portrayed, and a lot of its content is on the Internet. Parents, as the Bible declares, should train up a child in the way he should grow and when he is old he will not depart from it. So, from the home, let us maintain the principles and directives that come directly from Almighty God."