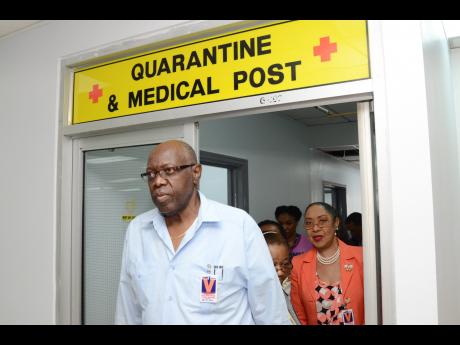 A year after an Ebola outbreak pushed the world into panic, the Caribbean Public Health Authority (CARPHA) has described the region as being adequately prepared to deal with the disease that killed more than 27,000 people globally.

CARPHA director Dr James Hospedales, made the disclosure following a two-day Ebola simulation exercise, where he gave the Caribbean 3.5 out of five in regards to being prepared for Ebola.

The Ebola simulation, dubbed 'Exercise Hummingbird', was carried out on July 13 and 14 in 13 countries, including Jamaica, by CARPHA in collaboration with the Implementation Agency for Crime and Security.

"On a scale of one to five, with five being the highest, I would say that the Caribbean is at 3.5," said Hospedales, who was keynote speaker at the Jamaica Association of Professionals in Nutrition and Dietetics obesity conference in Kingston last Wednesday.

"Last year, when the whole scare started and we took stock, we realised that none of the countries in the Caribbean had met the standards of what are called the international standards of health regulations," explained Hospedales.

"The Pan American Health Organization and CARPHA did a lot of assessments directly on national preparedness and found gaps in ports of entry, in the hospitals in terms of isolation and laboratory capacity.

"In all those areas, we have improved. Can you ever be fully ready? There is always room for improvement," said Hospedales, who explained that attention was particularly paid to immigration "because that is where the people were coming in".

Hospedales declined to speak on the level of preparedness of individual countries and how they ranked against other Caribbean countries, but noted that health administrators of all membership states were enthusiastic and encouraged about the exercise.

"I would say, though, that governments have invested heavily and you have seen improvements in isolation, training of staff and protective equipment. Those have been stepped up quite a bit," he said.

According to Hospedales, lack of funding and resources were also issues coming out of last year's scare, and efforts have been made to facilitate funding and donations in preparation for Ebola and other similar type illnesses.