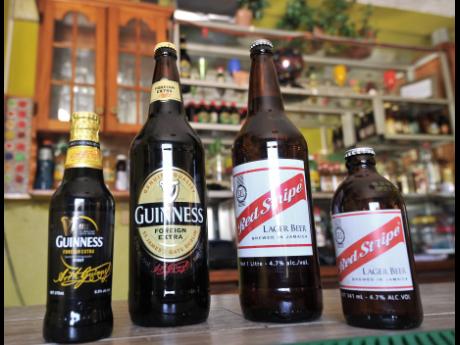 The move by some companies to offer supersize (one litre or more) bottles of alcohol for sale is causing concerns for members of the National Council on Drug Abuse (NCDA), who are warning that bigger is not necessarily better.

"Alcohol is measured in standard drinks, and, for example, a beer will contain at least one and a half standard drink. So if a man is drinking beer, as it relates to the World Health Organization's (WHO) standards, he should not be having more than three to four beers a day," said Suzanne Brown, substance abuse officer at the NCDA.

"When they buy the big containers they are going way over the limit. Three to four means that the drinks are to be paced and spaced between each other. When they drink those big bottles they are pushing it. They are really going over their daily limit," added Brown.

She said between April 2014 and April this year, 58 persons have sought assistance from the NCDA to deal with alcohol-specific problems, while at least 126 persons have visited its offices for help with a mixture of alcohol and other substance abuses.

According to Brown, the majority of alcoholics who have visited the NCDA are hooked on rum, while others prefer beer. These alcoholics spend a minimum of $1,000 per day to feed their habit.

"So we looking at them spending about $7,000 for the week ... and if you calculate that as yearly expenditure you are looking at more than $300,000. And that is just the basic, the minimum for some," said Brown.

The NCDA officer said the highest level of alcohol usage was found in the 25 to 35 age group, with the prevalence decreasing as persons get older.

Brown said teenage boys are drinking more than their female counterparts, and recent studies indicate that 42 per cent of boys were experimenting with hard liquor; 32 per cent with wines, and 30 per cent with beers.

Director of the Epidemiology Research at the Tropical Medicine Research Institute at the University of the West Indies, Rainford Wilks, last week noted the implications of alcohol with certain lifestyle diseases, particularly hypertension, in Jamaica.

Wilks was principal investigator of the Jamaica Health and Lifestyle Survey 2008, which found that two-thirds of Jamaicans report that they have consumed alcohol, with males more frequent at 84 per cent versus females at 53 per cent.

Fifteen per cent of men and three per cent of women reported that they consumed more than five alcoholic beverages daily.

"That is why the WHO makes the distinction of harmful drinking, that is, binge drinking, excessive drinking and that kind of thing," explained Wilks, as he argued that excessive alcohol consumption usually leads to other harmful habits.