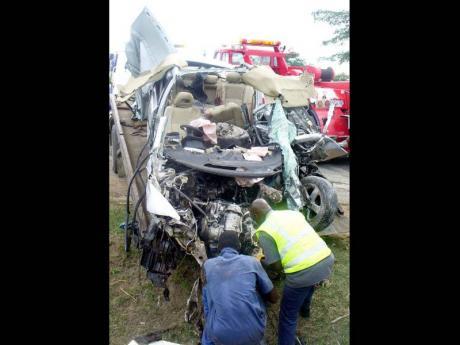 File Photo
Two men assist in putting the mangled remains of this Honda Civic motor vehicle on a wrecker. The car was involved in a crash on the Bustamante Highway, Clarendon recently.

There has been a 90 per cent spike in fatal crashes in Clarendon this year, resulting in a 69 per cent jump in road deaths in the parish.

That is according to the latest statistics from the National Road Safety Council (NRSC), which shows that Westmoreland has also seen a 76 per cent increase in fatal crashes, resulting in a 63 per cent spike in fatalities.

According to the NRSC, Clarendon has so far recorded 19 fatal crashes this year, nine more than for the corresponding period last year while Westmoreland has recorded 30 fatal collisions, compared to 17 for the similar period last year.

The NRSC says this has resulted in 20 persons being killed on the roadways in Clarendon and 30 in Westmoreland.

A total of 200 persons have died in 186 motor vehicle crashes this year, up from 181 deaths in 169 crashes in the corresponding period last year.

Vice-chairman of the NRSC, Dr Lucien Jones, says an increase in the number of motorcyclists being killed in Westmoreland and careless use of a main thoroughfare in Clarendon, are among the reasons both parishes are seeing an increase in road fatalities.