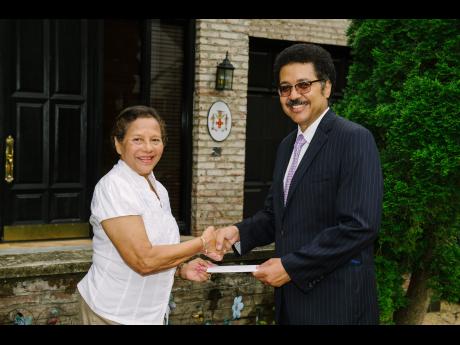 Contributed
Ambassador Stephen Vasciannie (right) accepts a cheque for US$2,000 from Erna Radifera, donor of the Frank Subaran Awards, in Washington DC.

The top two students at Kingston College in the 2015 CSEC examinations will each benefit from a US$1,000 prize dubbed the Frank Subaran Awards for Academic Excellence.

At that start of this month, Erna Radifera, a Jamaican living in Washington DC, presented a cheque for US$2,000 to Jamaica's Ambassador to the United States of America and former Kingston College head boy Professor Stephen Vasciannie.

This money is to be used to fund two awards at KC in the memory of Dr Frank Subaran, a Kingston College old boy and brother of Radifera.

Subaran left Kingston College in 1959 with academic honours leading to an engineering scholarship. After leaving Kingston College, he read for a bachelor's degree in electrical engineering and then a doctorate in telecommunications from the University of Edinburgh in 1970.

In his professional life, he worked at JAMINTEL, the Commonwealth Telecommunications Organisation, London, and INTELSAT, Washington DC.

In presenting the money to the Jamaican ambassador, Radifera noted her late brother's commitment to education and his willingness to support his alma mater.

Vasciannie thanked Radifera for her contribution and acknowledged that contributions such as this help to advance education in the country.