New St Mary custos has big plans for the parish 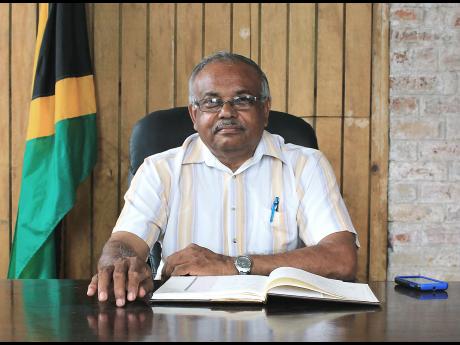 As the new custos rotulorum of St Mary, Errol Johnson, believes the parish's future prospects rest in the hands of those who are committed to cultivating young people's minds and a self-sustaining agriculture industry.

After spending more than 20 years transforming St Mary High School into one of the country's best academic institutions, in 2014 the affable principal took the reins at another local school, Islington High, and unsurprisingly, ranks education as the key element of his parish development strategy.

Johnson told The Gleaner: "My emphasis will be on getting our children properly educated. I'm not talking about getting certificates or degrees, but being knowledgeable and understanding the importance of morality, loyalty, and respect for elders.

"These are some of the things I would like to see infused into the education process. Not so much at school, but how children are related to on the streets and at home.

"We need a renewal of family values, and I say renewal because these things are not alien to us. They are a part of the African, Indian and Chinese cultures, and we are all products of those three cultures."

The custos insists Jamaican society has become devoid of traditional family values, but how has this happened and who is responsible? "It's very simple," he explained. "People have moved from a spiritual to a material path.

"For example, a family of three with mother, father and child live comfortably in a two-bedroom house, but if, by God's grace, the parents acquire wealth, they would want a bigger house.

"The drive for material makes people greedy, so the spiritual path of humility, love, caring and sharing is neglected. The material world has taken over from the spiritual world because we see differences in people, and until we stop doing that, we'll continue to have problems."

Johnson, who was appointed as custos in June and will be installed officially on 20 August at a special ceremony in Port Maria, believes the parish could also benefit from a return to traditional farming practices.

He explained: "I would use my office to get our farming community back on track. We have a lot of good land and rainfall, and with proper guidance from the Ministry of Agriculture, we can produce enough food to sustain ourselves.

"I would want to see infrastructures in place that enable St Mary to have an agro-industry where our farmers' products are taken from them, processed, and distributed.

"In other words, I would like to see the Government reactivate the Agricultural Marketing Corporation and use all of our scientific knowledge to ensure that our farmers can produce without having to worry about the market."

As Johnson prepares to settle into his new role, he acknowledges that developing St Mary is a Herculean task, but is nevertheless optimistic.

He said: "There are two sayings from (the ancient Hindu scripture) the Bhagavad Gitathat I live by: 'Do your work and do not look for the fruits thereof' and 'Whosoever offers me fruit, a flower, a leaf or even a little water, I appreciate that; that is my devotee.'

"Those sayings have really guided my life because they tell me to always offer and when I do, to offer truly. These are some of the things we need to look at that are lacking. They might be difficult, but it's worth trying."