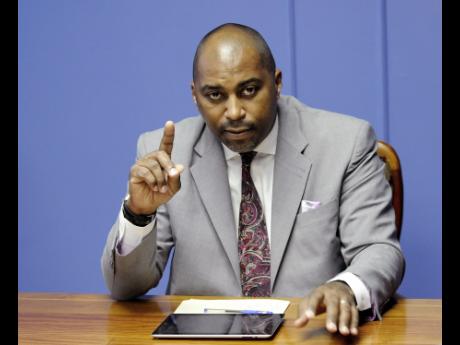 Robinson ... readily admits to being inspired by his predecessors on both sides of the political divide.

When Julian Robinson and I met up for lunch in New Kingston recently, he was, ostensibly, quite tired. He should have been. His 10-month-old baby allowed him little more than three hours sleep the night before.

"I take the night shift because my wife is with the baby during the days. I always get up around four o'clock in the mornings. I planned to go running this morning, but the baby was crying last night and only eventually fell asleep in my arms after one, so there was no running for me today," he said laughing.

'New-parent sleep' notwithstanding, Robinson was as full of energy as he seems at political rallies and government events. The state minister is quick with a smile and handshake with passers-by, some of whom know him personally, others who simply know who he is. In that way, he perhaps is like many other politicians, but in other ways, he's the polar opposite of the stereotype.

Robinson has managed to develop and maintain a reputation unsullied by corruption and rumours of corruption. It has afforded him a privileged space where public perception is concerned; a space shared by only a few active politicians. Expectations are high. I asked him how he felt about this.

"I realise that people do have high expectations of me. I feel it. The truth is, though, that I can only be myself. That is all I have ever done. I try to do what is right and what is in the best interests of the country. I guess I don't feel pressure because I have always just been myself and will continue to do so," he said. In some ways, said Robinson, the public's high expectations can even be helpful. "It can help keep me in line. I wouldn't want to let so many people down. The shame would be too much to bear."

In the right situations though, Robinson said he's more than willing to let people down. He's the member of parliament for south east St Andrew and has in that post revealed himself as a tell-it-like-it-is representative.

"Some people might be surprised by some of the requests members of parliament receive from constituents. There is a woman who once asked me for money to pay for a wedding. I advised her to simply have the wedding that she could afford. I've also been asked for a 'mek-up' to buy a car. Now, this is not a bus fare 'mek-up', this person wanted me to give him money to help buy a car. Some people understand, but some don't. In many cases, the law allows members of parliament to provide assistance out of the Constituency Development Fund, but not all requests can be granted."

Robinson's journey to being a member of parliament making these kinds of calls, a state minister and deputy general secretary of the People's National Party (PNP) has been active. At Campion College, he was a focused young cricketer whose dream was to someday play for the West Indies team. He said the only reason he didn't further pursue this path is that he wasn't good enough to make it to the big leagues. When he left high school, he went on to earn a BSc in Management and Economics from the University of the West Indies, Mona. He also holds an MBA from the University of Illinois at Urbana-Champaign in the United States. He later worked as a management and eBusiness consultant in London, at IBM, and Scient.

This experience, said Robinson, has proven useful. "I was with IBM for three and a half years. I learned a lot there. I learned to be professional and how to work with different people and in different cultures." During this time, Robinson travelled a lot, mainly around Europe. At one point, he travelled every single week in a year. "I have great memories from this time. I especially liked Turkey. I enjoyed the history and the architecture there," he said.

Robinson's starting salary at IBM was £40,000. At Scient, it was £57,000 with a 30 per cent bonus stream. Giving this all up to become a public servant in Jamaica might seem foolhardy to many, but not Robinson. "It depends on what you see as your purpose in life. If your desire is just to live a big life, then money needs to be a major factor in your decisions. But serving Jamaica was something I always wanted to do. Money is great but it has never been my greatest motivator. My greatest joy comes from helping to solve national problems and helping to improve people's lives," he said.

Robinson readily admits to being inspired by his predecessors on both sides of the political divide. It's his parents, though, who he said have had the biggest impact on him. He speaks particularly highly and often of his father, renowned judge Patrick Robinson, who currently sits on the International Court of Justice at The Hague.

"I'm very close to my father. My mother passed away a few years ago. Both of them taught me about integrity and the value of honesty and hard work. I'm the last of three children and we were all always encouraged to be the very best possible versions of ourselves."

Whether Robinson hopes these values will someday help him become prime minister of Jamaica, is unknown. He shies away from talking about political aspirations. Perhaps the reason for this is related to what he said is the greatest lesson he has learned over the years working in politics.

"It's better to talk less and listen more. This is useful especially at the constituency level. I mean, really listening to people and learning from them. If you want to grow as a person, this is one of the best things you can do. This way, we can work together to tackle the big problems. If we can master this, then I think we would be better positioned to succeed in whatever it is we're doing," he said.