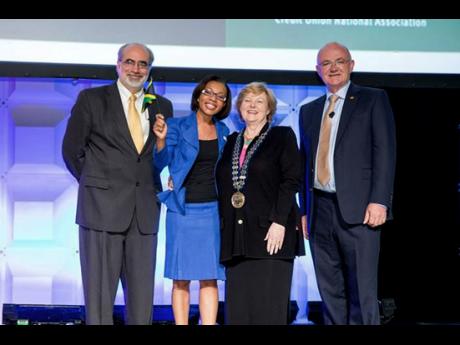 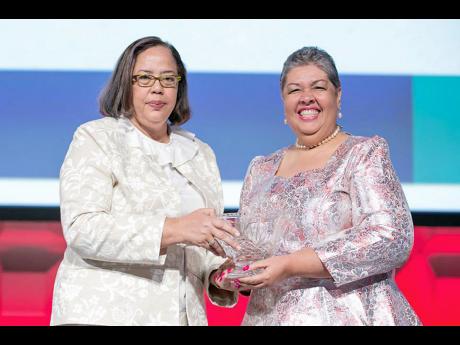 Contributed
Yvonne Ridguard (left), member of the board of World Council of Credit Unions, makes a presentation to Aloun Assamba, Jamaican High Commissioner to London, for distinguished service, on July 12 in Denver, Colorado. Assamba, a former general manager of COK Sodality Credit Union, was one of three individuals who received the highest Credit Union award for her work in the local and international movement.
1
2

The Jamaican Credit Union Movement was in the spotlight at the recently-concluded World Council of Credit Union's (WOCCU) Conference held in Denver, Colorado from July 12-15. The movement received four awards: a WYCUP scholarship, triple recognition for work with the Caribbean Credit Union Development Education (Carib DE) leadership programme and a Distinguished Service Award.

Tanya Brown, a business relationship officer at the Jamaica Co-operative Credit Union League (JCCUL) copped one of the six WYCUP scholarships from a field of approximately 40 candidates from 10 countries across the world.

Brown represented Jamaica well in all areas and emerged a winner after starting out as - in her words- "an underdog". Having won the 2015 WYCUP Scholarship, Brown will receive an all-expenses-paid scholarship to the 2016 World Credit Union Conference in Belfast, Ireland compliments of WOCCU. Five scholarships are offered every year to outstanding young professionals who have made significant contributions to their credit union system and have the potential to make a global impact. This year for the first time in WCUP history, six individuals were awarded, attesting to the high quality of the candidates. The scholarship and event are designed to promote and engage the next generation of credit union leaders in the international credit union movement.

The Distinguished Service was presented to former general manager of COK Sodality and the current Jamaican High Commissioner to the United Kingston, Aloun N'dombet Assamba. She received the award for service to the Credit Union Movement at the local and international levels. World Council's Distinguished Service Award is the highest honour paid to individuals and institutions by the worldwide credit union movement. Created to recognise outstanding contributions to international credit union development, Distinguished Service Awards are presented each year at World Council's World Credit Union Conference.