Let’s stand up for what’s right with Jamaica 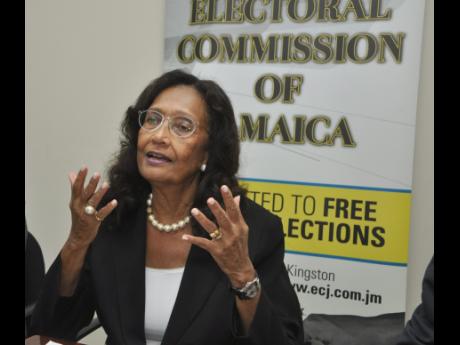 The following are excerpts of a speech presented by the chairman of the Electoral Commission of Jamaica (ECJ), Mrs Dorothy Pine-McLarty, last Thursday at a public forum held at the Port Antonio High School in Portland.

What is the Electoral Commission of Jamaica (ECJ)? It is the vanguard of the country's electoral system. It ensures that all elections are free and fair; it ensures that no unfair advantage is given to any party or individual contesting an election; it ensures that each elector votes without interference or intimidation. It guards against wrongdoing during elections.

The ECJ and the Electoral Office of Jamaica (EOJ) have done a fine job over the last several years in strengthening the country's democratic process. Indeed, both entities have worked unceasingly to deepen and broaden the process, so today we have a strong and robust system of electoral governance which can be compared to the best internationally.

I want to discuss the issue of democracy, as I believe this is one of the most critical components for us, as a country, moving forward. What is democracy?

We often talk about democracy; I did say earlier that we have worked very hard to strengthen the democratic process in Jamaica.

But what really is this? Depending on who you speak with, it is defined in various ways:

- Democracy is a way of life based on respect for individuals;

- Democracy is a system of rule based upon a government of the people, by the people and for the people;

- Democracy is a form of government where the government can be changed without revolution and/or bloodshed;

But here is the definition which I believe is most appropriate in our context:

- Democracy is a system that provides its citizens with the most freedom, the most opportunity, the greatest prosperity, and the most comfortable life. In other words, creating a society in which to live, work and raise families.

So, democracy is not an abstract; it is important for the transformation of a society, a nation, a country.

It is, therefore, true to say that like the ECJ, the EOJ and National Integrity Action, you as members of the public, as citizens of Jamaica, have a responsibility to help to deepen and strengthen democracy in this country.

In order to ensure that democracy stays healthy and in good shape, each and every one of us as Jamaicans has to become active.

WE MUST DEMAND PROPER REPRESENTATION AT EVERY LEVEL

There are some things we must demand both of ourselves and of others, namely, that we are involved in what is happening around us; that we comply with the law; that we support the security forces; and that we get actively engaged in the governance process; and public discussions like this one.

When you stand up and speak out against corruption, you are helping to strengthen and deepen democracy. Collective action, rather than individual action, is more effective in reducing corruption, so we must take a collective stance as a country.

When you demand transparency, accountability and fair play, you are helping to strengthen and deepen democracy. Transparency and accountability are both essential parts of citizen participation, so let us insist on this in everything that we do as a people.

When you insist on proper political representation at the local and national levels, you are helping to strengthen and deepen democracy. Democracy is an important factor of controlling government power and it prevents the people who hold power from abusing it and using it for their own gain rather than for the people's benefits.

When you insist on proper service delivery in both the private and public sectors, you are helping to strengthen and deepen democracy in this country. Your participating in this town hall meeting is part of the process to strengthen and deepen democracy. This is so because freedom of speech and freedom of assembly are fundamental principles in any democracy.

When you press for an education system that works and school boards that are fee of partisan politics, you are helping to strengthen and deepen democracy. This is because one of the prerequisites for democracy is an educated and cultured population. Democracy can only be sustained by a population which can participate in frank and open debates and which is not afraid of otherness, but is capable of showing tolerance.

DEMOCRACY IS ALSO ABOUT ECONOMIC AND SOCIAL DEVELOPMENT

It is true to say that without depth and breadth, any debate can descend into mudslinging and isolated allegations, and that is not a situation in which one can build a healthy political society. We must guard against this in Jamaica, especially at election time.

There are those analysts who believe that a strong democracy can aid a country's economic and social development. More recent analysis emphasises how democracy fosters development. This is a principal conclusion of the Human Development Report, 2002, published by the United Nations Development Programme, which notes that "democratic governance can trigger a virtuous cycle of development - as political freedom empowers people to press for policies that expand social and economic opportunities".

In a democracy, you can choose precisely the religion that is most meaningful to you, and you can choose your spouse and your education. You can listen to any kind of music, you can participate in any public debate, and you are free to watch any movie and read any book that you like. You can move around freely and you do not have to ask anybody for permission to do so. You can also choose freely what kind of clothes you wish to wear. You have a right to a proper justice system, a proper education system, and a proper health care system.

So, based on what I have said so far, you should see the importance of ensuring that Jamaica remains a strong democratic nation; and that we must always work to improve the democratic process; it is not about just holding and participating in elections.

Democracy, however is not a system that we just introduce once and for all, after which it becomes self maintaining. It is a culture that must be cultivated and nurtured, and which requires the right circumstances to live and function. It is a constant process, almost like a living organism.

If we do not actively keep democracy alive with debate and free elections and the many other things mentioned earlier, it will die. Democracy calls for the people to be actively involved.

Let us, therefore, as ordinary people don't see democracy as unimportant; it is essential for any modern society in this, the 21st Century.